Warren Pushes for Justice Dept. to Investigate, Possibly Jail, Those Responsible for ’08 Crash 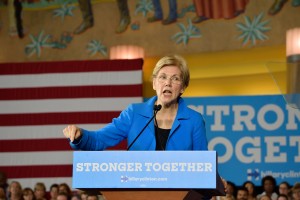 Sen. Elizabeth Warren is calling for the Justice Department to explain why it failed to prosecute the individuals and companies identified as having likely committed wrongdoing by the Financial Crisis Inquiry Commission (FCIC)’s probe into the causes of the Great Recession.

In separate letters Thursday to Michael Horowitz, the Inspector General of the Justice Department, and James Comey, FBI Director, Warren asked for transparency.

In an interview with Bloomberg, Warren said that she hoped that a Clinton administration would be more aggressive than Obama’s in pursuing those responsible for the crash, and potentially jailing them. “I will do everything I can to make that possible,” she said.

She noted that her office’s review of the FCIC documents found that it referred nine individuals to the DoJ who were suspected of having violated the law. “The DOJ has not filed any criminal prosecutions against any of the nine individuals. Not one of the nine has gone to prison or been convicted of a criminal offense. Not a single one has even been indicted or brought to trial,” she wrote.

Warren added that the FCIC also found that 14 corporations were referred to the DoJ for having potentially violated the law. “Only five of these 14 corporations paid any fine or suffered any additional consequences for their actions,” she writes.

Not every individual or company accused of a crime is guilty of that crime and not every DOJ referral results in a conviction. But the DOJ’ s failure to obtain any criminal convictions of any of the individuals or corporations named in the FCIC referrals suggests that the department has failed to hold the individuals and companies most responsible for the financial crisis and the Great Recession accountable. This failure requires an explanation.

In her letter to Comey, Warren argued that when the FBI Director publicly disclosed information relating to the investigation of Hillary Clinton‘s email server, an unusual move, he set a “new FBI standard of transparency.” Comey had explained his decision to reveal information about the FBI investigation by saying that “the American people deserve those details in a case of intense public interest.”

Warren wrote, “[S]urely the criminal prosecution of those responsible for the 2008 financial crisis should be subject to the same level of transparency.”

For the uncounted millions of Americans whose lives were changed forever and for those who are still dealing with the consequences of the crash, i can think of no matter of “intense public interest” about which “the American people deserve the details” than the issue of what precisely happened to the criminal referrals that followed the 2008 crash.

On Twitter, the senator said it was an “abysmal failure” that not a single person or corporation referred to the Justice Department by the FCIC had been prosecuted.

Not one of the people or corporations referred to @TheJusticeDept by the FCIC has been criminally prosecuted. That’s an abysmal failure.