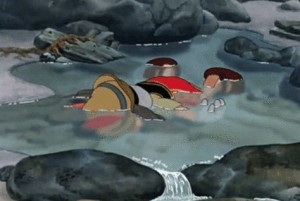 In short order, Washington Post fact-checker Glenn Kessler was all over the ad, awarding it a pile of Pinocchios based on assumptions and judgment calls that don’t add up to Jiminy Cricket.

Kessler gets at least one thing right, though. The ad is “over the top,” so much so that the top can’t see it without a telescope. As to whether the ad is fair to Romney, well, I’m a liberal, so I hate to see anybody take that kind of a beating. Almost anybody.

When I first saw that Priorities’ ad sought to nail down a vision of Mitt Romney’s America, I wondered just how they would do that, given Mitt’s positional versatility.  It is with that very flexibility, though, that Kessler shields Romney. He criticizes Priorities for basing its claim that Mitt wants to privatize Social Security on an old Romney position. Just how far back did Priorities have to reach into the historical annals? A year and change:

Romney expressed some interest in private investment accounts as part of Social Security in the 2008 presidential campaign. But he wrote in his recent book that in the wake of the 2008 stock crash, he no longer thought such accounts were appropriate.

Romney’s book came out in March, 2010, though, and if recent history is any indication, even his books are set in mercury, not stone. Romney has so many “come to Jesus” moments that he’s got his own parking space in Jesus’ office complex. If it’s fair for Romney to choose whatever position is politically convenient at any given time, surely it’s fair for Priorities to do the reverse. In any case, privatizing Social Security has long been a goal of Republicans, and Romney’s longtime support for the idea fairly demonstrates that he would be unlikely to resist a push by a GOP-controlled Congress to do so.

It’s also ironic that WaPo’s entire ratings system relies on a similarly “old” position. While Pinocchio did, at one time, experience fib-related nasal protrusion, he later shed the condition when he became a real boy.

Kessler also dings Mitt Romney’s America over its claim that Romney would “dismantle” Medicare (oddly referring readers to a fact-check that refutes Republican attacks on Democrats over Medicare) with a rationale that seems to rely on a cure for death: (emphasis mine)

“Medicare dismantled.” This incorrect claim, for which we have previously awarded as many as Four Pinocchios,  is based on Romney’s support for the House Republican budget plan, which would alter the financing of Medicare for people currently under the age of 55. Certainly, serious questions have been raised about what would happen to the cost of premiums under the GOP plan, but it is a stretch to say the system would be “dismantled.” Indeed, it would remain the same for elderly Americans — presumably the main target of this message.

So, as long as someone now over the age of 55 yet draws breath, the current Medicare system still technically exists (a Pinocchio-worthy distinction) under the Ryan plan, but unless one of them is Duncan McLeod, Priorities is correct. Despite Kessler’s misgivings, there is little controversy over how Ryan’s plan would change Medicare, transforming it from a guaranteed benefit to a voucher system that everyone agrees would leave beneficiaries holding the bag for huge differences between premiums and the vouchers.

Maybe “dismantle” is the hottest possible word choice, as opposed to “essentially ends,” or “ends Medicare as we know it,” but this ain’t Tiddly Winks. Based on WaPo‘s own scale, this is a one-Pinocchioer at best.

Kessler then challenges a portion of the ad that quotes Chris Wallace saying, as debate moderator, ” You bought Dade International, two U.S. plants were closed, 2,000 workers were laid off,” which is factually true. So what’s the problem? You tell me:

The ad tries to undercut Romney’s portrayal of himself as a job-creator by focusing on one case where a business his company invested in had to lay off workers. As we have written, the precise numbers may be impossible to obtain, but over time it appears that Romney, in his business practices, helped create more jobs than were lost.

“It appears?” Is that what we’re doing, an “appear-check?” Kessler’s own fact-check of Romney details some (but not all) of the jobs incinerated by Romney, and concludes with a “verdict pending,” which is a pretty flimsy basis on which to award Pinocchios.

Even if you grant Kessler’s generous assumption, the Wallace quote is accurate and true, and its central point, that Romney profited from layoffs, doesn’t change when you factor in the (indeterminate) number of times Romney added jobs.

Kessler also resorts to the old “out of context” dodge regarding a couple of direct Romney quotes in the ad, “don’t try and stop the foreclosure process,” and “I’m for the Tea Party.”

Every quote in the world is, by definition, removed from its context. Kessler fails to demonstrate how including context substantially changes the meaning of either quote. In fact, on foreclosures, Romney goes on to show exactly where he stands in relation to the bright line between the 1% and the 99%, saying, “don’t try and stop the foreclosure process. Let it run its course and hit the bottom. Allow investors to buy homes, put renters in them, fix the homes up.”

The most egregious problem with WaPo‘s fact check is its defense of Romney’s veto, while Massachusetts Governor, of a ban on outsourcing. Unless I’m reading it wrong, they’re saying that it was okay because there wasn’t all that much outsourcing going on, anyway:

…the group points to Romney’s 2004 veto of a bill that would have prohibited state contracts with companies that use overseas employees for the work.  Romney, then governor of Massachusetts, argued at the time that the bill did not protect the state’s jobs but might actually cost money. Proponents of the bill had touted a union study claiming that $7 million was spent on contract work overseas — but that’s a drop in the bucket compared to Massachusetts’s $24 billion budget at the time.

This is a fact check, though, and the fact is that Romney acted unilaterally to allow outsourcing. If you vote to allow murder, you don’t get credit because not that many people got murdered. Kessler links to, and promotes, Romney’s assertion that the outsourcing ban “might actually cost money” (Romney said, “it had the potential of costing our citizens a lot more money”), but neither Kessler, nor Romney, offer a single argument to back that up. That’s because it’s a circular argument: taxpayers might pay a little more on those contracts (the ones Kessler says there aren’t many of), but the Massachusetts citizens who kept their jobs would benefit, and continue to contribute to the economy.

If there’s anything wrong with Mitt Romney’s America, it’s with the notion that anyone in the world could divine a coherent vision from the candidate’s Wheel of Fortune positions, but that’s not Kessler’s criticism, and Romney’s flimsy political rudder shouldn’t be allowed to shield him from criticism.

In case you missed it, here’s Mitt Romney’s America, from Priorities USA Action: