Washington Post is Sure Publishing a Lot of ‘Fake News’ About Donald Trump, Russia Lately
Opinion

Washington Post is Sure Publishing a Lot of ‘Fake News’ About Donald Trump, Russia Lately 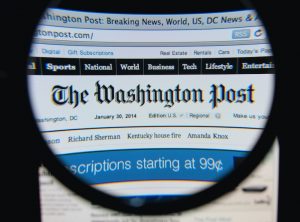 In the past month or so, there have been three embarrassing and major corrections on three separate pieces from The Washington Post, all of which were critical of president-elect Donald Trump and his flirtation with the Russians.

First, there was a much-belated correction to a November story which uncritically passed along the accusation that the Russian government was behind the explosion in fake news during the 2016 presidential election. One of those groups making that claim was PropOrNot, which maintains a list of media sources that they believe are proprietors of Russian propaganda. That propaganda effort, they claim, was designed to elect Trump.

The problem is, that list was very, very flawed and the “experts” who curated it are completely anonymous. Posting only one story that merely aligned with Russian interests was enough to earn a spot on their list. Media outlets that ended up tarred as Russian propagandists were incensed.

That led to a huge editor’s note being attached to the story recently:

Editor’s Note: The Washington Post on Nov. 24 published a story on the work of four sets of researchers who have examined what they say are Russian propaganda efforts to undermine American democracy and interests. One of them was PropOrNot, a group that insists on public anonymity, which issued a report identifying more than 200 websites that, in its view, wittingly or unwittingly published or echoed Russian propaganda. A number of those sites have objected to being included on PropOrNot’s list, and some of the sites, as well as others not on the list, have publicly challenged the group’s methodology and conclusions. The Post, which did not name any of the sites, does not itself vouch for the validity of PropOrNot’s findings regarding any individual media outlet, nor did the article purport to do so. Since publication of The Post’s story, PropOrNot has removed some sites from its list.

Let’s get the obvious out of the way: yes, there is a remarkable irony in the fact that the WaPo exposé on fake news turned out to be based on unverifiable claims.

But I have to say, I don’t quite understand WaPo‘s position here, namely that they’re passing along PropOrNot’s claims without vouching for them. There are untold amounts of self-proclaimed and anonymous experts dwelling on the internet hawking claims that may or may not be true. When a prominent newspaper picks one of those theories and repeats it without noting competing arguments or the holes in their theories, the inescapable conclusion is that the paper believes those theories have merit.

Put another way: suppose The Washington Post passed along the bogus claim that Hillary Clinton murdered a DNC staffer, based on a shadowy group’s say-so and without noting the considerable evidence against that theory. Would anyone really argue they weren’t actually accusing Clinton of being a murderer? Or would the “just asking questions” defense be seen as the sham that it is?

After the story went to print, Burlington Electric said in a statement that they had indeed found Russian malware on one of their computers. But the computer was not connected to the electrical grid, which remains secure. The utility company’s statement came only an hour and a half after the piece was published, making it unclear how much of an effort the authors made to contact them beforehand. Disturbingly, the other Vermont utility company mentioned in the piece tells Forbes they were not contacted by WaPo about the story until after they went to print.

And then, the final nail in the coffin. Investigators told WaPo Monday that they don’t believe the utility company was targeted by Russian hacking at all. What’s worse, the “malware” discovered on their computer may not even be malware: “officials say it is possible that the traffic is benign, since this particular IP address is not always connected to malicious activity.”

Despite their initial failure to contact the actual parties involved, WaPo was sure to get Trump’s take before they went to print. Spokesman Sean Spicer told them it would be “highly inappropriate to comment” before they were briefed.

And here we arrive at the heart of the matter: both stories were about Russia, but really of course they were about Donald Trump. “President-elect Donald Trump has repeatedly questioned the veracity of U.S. intelligence pointing to Russia’s responsibility for hacks in the run-up to the Nov. 8 election,” the hacking story notes. PropOrNot likewise gasped that, “Russia was running a super PAC for Trump’s campaign. . . . It worked.” Even if they hadn’t been so explicit, both stories on phantom Russian operations came during a news cycle in which Trump has received criticism for his denial of other alleged Russian activities in the U.S.

We could add a third embarrassing correction here: a WaPo column that denounced Trump’s pick for OMB Director for being too inexperienced, in part for having never served on the House Budget Committee. Had the author or her editors spent three seconds on Google, they’d have discovered that Mick Mulvaney actually had served on that committee. Oops.

I don’t believe there’s a vast liberal media conspiracy out to defame Donald Trump (because there’s no evidence of that: see how that works, WaPo?). But when a series of major mistakes happen and every erroneous piece was politically damaging to the president-elect, I think it’s fair to question whether editors and reporters are letting their personal feelings about Trump (and by extension, the Russians) get in the way of healthy journalistic skepticism. And when they all happen in one newsroom…

At the very least, it’s fair to ask why there weren’t serious of high-profile, embarrassingly false stories about the evil Russians back when the Republican nominee for president was highly critical of Vladimir Putin, and was mocked by liberal editorial pages for declaring Russia our number one geopolitical foe. There sure seem to be a lot more now that the de facto head of the Republican Party is Putin’s greatest admirer and Obama’s shelved the reset button. Perhaps it’s a coincidence that coverage shifted at the same time conventional progressive and conservative opinions did a 180. Perhaps not.

Whatever the reason for these mistakes, they only hamper the paper’s credibility when they report on the real troubling stories about Trump and Russia– and believe me, there are plenty. The journalistic shortcuts and mistakes that led to these corrections are easily fixed; for the sake of the paper and the public alike, here’s hoping they are.