Washington Post, New York Times Agree: ‘The Narrative’ Of Romney’s Momentum May Not Be Real

Washington Post, New York Times Agree: ‘The Narrative’ Of Romney’s Momentum May Not Be Real 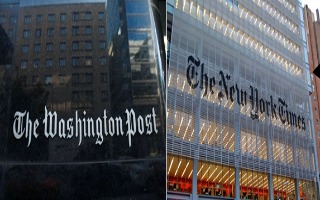 “The narrative” has taken more than its fair share of heat this election cycle. Too often, the press is on the receiving end of undeserved criticisms for simply reporting on what some view as undesirable realities. Today, however, as “the narrative” has coalesced around the notion that Mitt Romney is surging in the polls against President Barack Obama, the press is again taking it on the chin.

While the media is accustomed to the unrestrained ire of conservatives, they are now being berated by supporters of President Obama for advancing “the narrative” that he is losing. On Thursday, the push back against “the narrative” began as the Washington Post and the New York Times published reports questioning the validity of the notion that Mitt Romney has the political wind at his back.

With the exception of October 19 – 21, Mitt Romney has lead Barack Obama in the Real Clear Politics average of national head-to-head polls since October 9. Romney’s lead in the RCP average was the first he has ever held in 2012, and that surge in support was arguably only possible after his strong performance in the first presidential debate (and the president’s somewhat wanting performance).

Don’t tell that to The New York Times or the Washington Post. No, not because both iconic institutions’ editorial boards endorsed President Barack Obama for a second term today, but because both published reports investigating whether Mitt Romney’s momentum was ever real.

There’s been an active debate over the last few days in the political class about whether former Massachusetts governor Mitt Romney is genuinely the momentum candidate in the race, or whether he and his campaign are simply pulling the wool over gullible reporters’ eyes when it comes to the state of the race.

The Times, however, argues that while Romney may have legitimately surged in the early part of October, it appears that the tide of support for the Republican presidential nominee has receded.

“Is there Ro-mentum, or is it faux-mentum?” asks New York Times reporter Michael Cooper:

A debate has been raging among polling analysts and commentators about whether Mitt Romney is still gaining ground, as he did after the first debate, or if his bounce has slowed or stalled. But while some Republicans say that they still have the wind at their backs, several polling analysts weighed in recently to argue that the data suggests there is no longer a Romney surge.

“Mr. Romney clearly gained ground in the polls in the week or two after the Denver debate, putting himself in a much stronger overall position in the race. However, it seems that he is no longer doing so,” says the Times’ predictive guru Nate Silver, whose political forecasting model is regularly cited by Democrats eager to prove that Romney never had a chance to win this election –- surge or no surge.

While the following may verge on conspiratorial thinking, allow me to indulge: It is worth noting that this spontaneous burst of investigative reporting into the legitimacy of Romney’s boost of support in the polls comes one day after a highly-publicized article by New York Magazine Jonathan Chait in which he chided the press for inflating Romney’s boost in order to protect a financially beneficial “narrative” that the election could go either way.

“Obama’s lead is narrow — narrow enough that the polling might well be wrong and Romney could win. But he is leading, his lead is not declining, and the widespread perception that Romney is pulling ahead is Romney’s campaign suckering the press corps with a confidence game,” Chait wrote.

Even President Obama got into the game of challenging “the narrative.” In an interview with Brian Williams, the president was asked if he was nervous about his apparent slip in the polls against his Republican rival.

“You guys have some short memories. Folks in your business were writing me off a year ago, saying there was no way I would win,” Obama told Williams. So, the press is to blame for Obama’s utter collapse in the tracking polls and dramatic slippage in the individual state races.

Maybe it is a coincidence, but it seems that the nation’s preeminent papers of record have opted to kill “the narrative” dead. Those polls better return to the status quo ante the presidential nominating convention soon, or “the narrative” may end up having the last laugh.