Washington State Is Going To Allow Voter Registration On Facebook

Washington State Is Going To Allow Voter Registration On Facebook 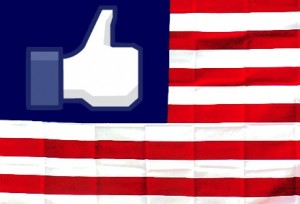 Voter registration has dropped quite a bit since 2008, and young people are going to need the right push to participate in the electoral process. Celebrities have been doing their level best to work with GOTV initiatives, but even in 2008, an election that drew in a lot of young voters, only 49 percent of people from ages 18 to 24 participated in the election. Well, Washington may have the answer, because according to Reuters, the state is allowing all eligible voters to register through their Facebook accounts.

The news was announced yesterday as an initiative that will be launching at the end of July. An application will be available on Facebook that will allow for an easy voter registration process. Here’s how the program works.

[A]n applicant must provide a name and birth date, which Facebook already collects from its users’ profiles, and a state identification number or driver’s license number, said Shane Hamlin, the state’s co-director of elections.

But Hamlin said the additional data is not shared with the social media network, which says it has more than 900 million users worldwide.

“Once you start the process, you’re no longer entering data on Facebook. Facebook is not collecting any of the data,” Hamlin said.

However, it should be noted that the application will automatically add some of the information you have already provided on your Facebook page.

The application is a joint venture between Facebook and Microsoft, and the youth organization Rock the Vote has already been working with the state to coordinate online voter registration tactics.