WATCH: Lady Gaga’s Moving Performance of ‘Til It Happens to You’ at the Oscars 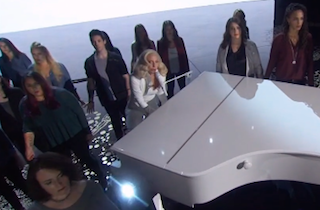 We already told you that Vice President Joe Biden would be on hand to introduce Lady Gaga when she sang “Til It Happens to You” tonight at the Oscars, but knowing in advance was a poor substitute for the real moment, so here it is!

The song is from CNN’s The Hunting Ground, a documentary about campus sexual assault. It held special meaning to the star and the Vice President, who have both been outspoken about the issue.

Biden introduced the pop star by saying, “Despite significant progress over the last few years, too many women and men on and off college campuses are still victims of sexual abuse.” He called on viewers to visit ItsOnUs.org and take the pledge to change the culture around sexual assault.

Then came Gaga’s emotional performance, which was her second time on the Oscars stage in as many years. Near the end, she was flanked by survivors of sexual violence, all of whom had messages like “it’s not your fault” and “survivor” written on their arms. She received a standing ovation as she grasped hands with those who shared her stage.

Gaga wasn’t just a performer tonight, though. Her song was nominated in the category of Best Original Song. If she ends up winning, she’ll have a new award to add to her list, which already includes Grammys and a Golden Globe.

The Hunting Ground hit a hitch last fall when NFL player Jameis Winston threatened to sue over it. Wonder if he tuned in to catch Gaga’s powerful performance tonight?