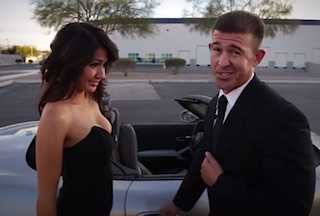 The website, which bills itself as a way for “modern gentleman” to act as “benefactors” for “sugar babies” who want to be helped “financially,” has launched a new campaign called “The Sugar Daddy Insurance Plan.” Here’s the pitch:

Most Americans believe the only options for getting healthcare and avoiding “Obama-drama” are through your employer or your parents. Well, they thought wrong! If you’re a young and beautiful woman (or man), SeekingArrangement.com has got you covered.

The average twenty-something woman not covered on her parents’ insurance will likely see an increase to her monthly premium. But with a Sugar Daddy footing the bill, $249/month will seem like no big deal–not to mention the spare cash.

Don’t worry about penalties or added costs due to the Affordable Care Act. The average Sugar Baby on SeekingArrangement.com receives $3000 month from her Sugar Daddy. Don’t get screwed by Obamacare, find a Sugar Daddy today!

If that wasn’t enough, a spokesman for the company explains the Obamacare alternative in an awkwardly low-budget video ad that asks, “Why settle for a horrible government site that doesn’t work?”

Instead, the host directs viewers to SeekingArrangement.com, where they can “pick their own plan.” It turns out, Fox News was right: Obamacare is just like prostitution.

Watch video below, via YouTube, and be careful, things get a little NSFW towards the end: