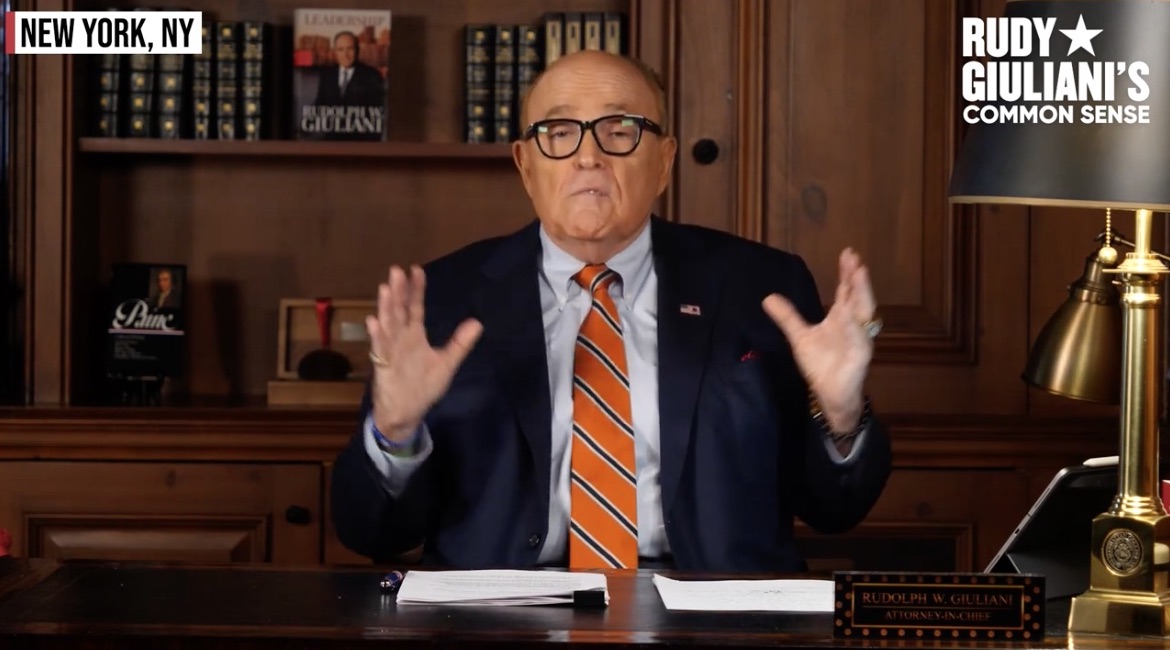 In the latest episode of his YouTube channel released on Friday, former New York City Mayor Rudy Giuliani pushed a bizarre and totally baseless conspiracy theory that millions of dollars in Rolex watches were looted from a store in Manhattan and subsequently sold off to fund the “treasury of Antifa, Black Lives Matter.”

What Giuliani failed to mention: the Rolex watch looting story at the center of his claim was completely debunked weeks ago as having never happened.

On his YouTube show, which the former Trump personal lawyer calls Common Sense, Giuliani declared that the nationwide unrest following the killing of George Floyd by police “clearly was orchestrated.” (The relevant portion begins at 25:05 in the video below.)

“You can’t tell me these were just, like, all spontaneous demonstrations,” Giuliani said, before intimating, without evidence, that poor, African-American protestors were strategically seeking revenge on wealthy, non-black communities. “These were demonstrations that were orchestrated and for a purpose, even for the rather disciplined purpose of not going into largely black neighborhoods and destroying their own neighborhoods — it happened in a few places — but in New York focusing on the more middle-class and upper-class areas, the rich areas.”

“In one particular night of looting and mayhem and attacks and violence, they made off with two million dollars in Rolex watches,” Giuliani falsely claimed, while not specifying who exactly “they” were. “Those are not Rolex watches that people are stealing for themselves. Those are Rolex watches that are going to be sold and going to the Treasury of Antifa, Black Lives Matter and groups that pay for this, that pay to move people around.”

Giuliani’s wild conspiracy revolves around a brief New York Post story from June 1, which cited NYPD police sources saying $2.4 million of watches had been stolen from a Soho Rolex store. The story quickly went viral, but almost as quickly fell apart when the store’s own management confirmed to the press that it was not a Rolex store and that “no watches of any kind were stolen.” This damning, contradictory evidence was not mentioned in Giuliani’s commentary.

Giuliani’s other, veiled claim that unnamed groups are paying the protestors and offering coordinated logistical support to looters echo current, extremist conspiracies, documented by the Anti-Defamation League, that George Soros and his Open Society Foundation are funding “rent-a-mobs.” Giuliani is a well-known critic of Soros. Last spring, he said he was “more of a Jew than Soros is,” and blasted the liberal billionaire as a “horrible human being” who has “elected eight anarchist DA’s in the United States.”

The former mayor is also reportedly under investigation by the U.S. Attorney’s office in the Southern District of New York — an office Giuliani used to lead — for campaign finance and lobbying violations. And his role as President Donald Trump’s personal backchannel envoy to Ukraine, where he sought 2020 campaign oppo research on Joe Biden while pushing discredited conspiracies, put him at the center of the recent impeachment of the president.