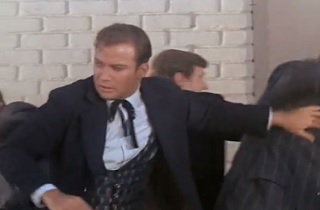 Movie executives are sitting up and taking notice of The Purge this morning, as the $3 million-budgeted genre morality play took the number one spot at the weekend box office, with $36.1 million. The film tells the story of a future America where almost everyone has a job, almost no one is poor, and peace reigns… most of the time. For 12 hours a year, all crime becomes legal, and during that eponymous purge, people get their violence on. If that premise sounds familiar to you, you’re probably a Star Trek fan, and you’re probably yelling “Festival!” right now.

Produced for what it costs to make about 100 IRS Star Trek parody videos, The Purge took in more coin, this weekend, than any other film, and more than doubled the take of its fellow rookie, The Internship. According to Box Office Guru’s Gitesh Pandya, the film suffered a steep 38% decline from Friday to Saturday, but news of its sleeper success could give the film some legs in the coming weeks. Pandya attributes The Purge‘s success to its marketing campaign, which includes this killer trailer:

The film’s plot, of course, hinges on the high-concept premise of a legalized release valve for the violent tendencies of human nature. That premise is very similar to that of Return of the Archons, a first-season episode of Star Trek: The Original Series (or as I call it, Real Star Trek). In that episode, the inhabitants of Beta III walk around in a blissfully narcotized state, sporting period costumes and speaking like they’re being dubbed by really loud Episcopalians. Then, at the “Red Hour” of 6 pm, everybody freaks out and starts hitting each other with props, and engaging in the 60’s TV version of rape, all while shouting “Festival!”

Star Trek‘s version of The Purge, while considerably less gritty than the film’s, also lasts 12 hours, at which point the citizens of Beta III return to their blissed-out ways. From there, the episode deviates considerably from the film, as the Enterprise crew are set upon by extras from M. Night Shyamalan‘s The Village, who fire defective Roman candles at dissenters, all at the behest of deity/Big Brother figure Landru. My friend Ed Morrissey sees an anti-Christian message in The Purge, but this episode of Star Trek subversively ties religion and totalitarianism together in its denunciation of blind faith and obedience.

Since Hollywood never met a success it couldn’t rip off for every drop of money, expect to see similar high-concept, low-budget properties hitting theaters in the near future. I’m working on a spec script about a section of the Garden State Parkway where you’re allowed to fire missiles at people who won’t get out of the left lane. Working title: “Keep Right, Except To Die!”

If you can’t get out to the movies to see The Purge, or you’d just like to watch the premise play out with a minimum of gore and realism, you can watch Return of the Archons for free on Hulu.