Stephen A. Smith Blast Colin Kaepernick for Not Voting: ‘He Absolutely Betrayed His Cause’ 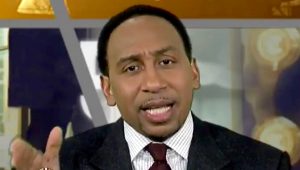 San Francisco 49ers quarterback Colin Kaepernick, whose National Anthem protests inspired a movement across the NFL, told reporters that he did not vote in this year’s election.

On Wednesday’s edition of First Take, Stephen A. Smith took the 49ers signal caller to task for his abstention.

ICYMI: @stephenasmith excoriated Colin Kaepernick for his choice not to vote. pic.twitter.com/RbDtznjwqk

Smith went on to call it “shameful” that Kaepernick chose to sit out the election.

After all this noise that you made, even though you didn’t intend to do so, by offending our military service men and women, and pointing out about how you wanted to bring attention to racial injustices and beyond in this country — to turn around and not to even take your behind to the polls to vote for a particular candidate, it is shameful. It is absolutely shameful.

Him of all people, because of the position he took, because of the attention he brought to the issues. The fact that you don’t even have the decency to go to the poll and activate yourself in this election, as our President said, is a damn shame.

Watch above, via ESPN 2.