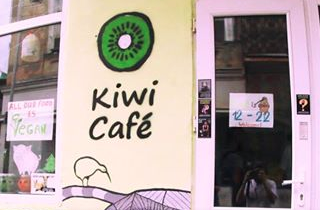 Tbilisi is the historic capital of Georgia, for anyone who doesn’t know. (I didn’t know.) From the pictures I’m seeing today, it’s beautiful! Sadly, I’m only looking at photos of Tbilisi because there was a horrific attack by 15 “radical ultra-nationalist Georgian Ultras” there on Sunday.

Oh, and I should mention that those radicals were brandishing meat and descended on a vegan restaurant called Kiwi Cafe, tinging this sad story with no small amount of straight-up weirdness.

Worse yet, customers and employees are claiming that patrons were targeted by the police while the actual perpetrators got away.

According to the Telegraph, a witness named Nono Antidze said this about law enforcement’s confusion upon arriving on the scene:

Because most of the staff, and a lot of the guests, have piercings and mohawk hairstyles, the police thought they were the ones responsible for the incident. We can only hope that there were some working surveillance cameras (in the area). When they see those videos, they will know what happened.

As a result of the police’s confusion, the real suspects were not pursued. Another witness, Ana Gulisashvili, wrote that the police actually mocked those in the cafe. She expressed frustration that the cops were more interested in ridiculing the clothing and lifestyle choices of patrons than protecting them.

There is no shortage of conflicting accounts of what happened:

@MikeRuney no, the server was not arrested after the shameful incident, but it seems also none of perpetrators was arrested (so far).

One issue that neighbors of the cafe have pointed out is that this is not the first public action by the radical Ultras. They worry that the parade that took place days before the attack is a sign that Georgia’s far right activists are planning a real political move in the near future.

The cafe has requested that patrons continue coming to the establishment and that anyone moved by the story send donations.