What Did Obama Adviser Tony Blinken ‘Exactly’ Say If Congress Votes No On Syria?

What Did Obama Adviser Tony Blinken ‘Exactly’ Say If Congress Votes No On Syria? 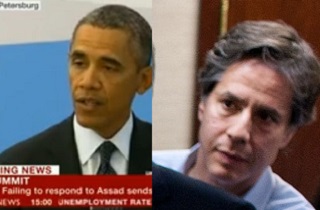 At a G20-capping press conference in Moscow Friday afternoon, President Obama was repeatedly pressed over whether he would order a military strike on Syria even if Congress failed to authorize such an intervention, a hypothetical which Obama repeatedly declined to engage, instead expressing confidence that Congress, after thoughtful and thorough debate, would approve action. However, ABC News’ Jonathan Karl asked the President if he agreed with a statement by Deputy National Security Adviser Tony Blinken that “it is not your intention to attack if congress doesn’t approve it,” to which the President replied “I don’t think that is exactly what he said, but I think I’ve answered the question.”

So what, exactly, did Tony Blinken say?

In a Tuesday interview with NPR’s Steve Inskeep, Blinken was asked if the President would strike Syria even if Congress fails to authorize military action, and Blinken replied that “The President, of course, has the authority to act, but it’s neither his desire nor his intention to use that authority, absent Congress backing him.”

Earlier in the press conference, the President enunciated another shift in the White House’s thinking on Syria. Drawing a distinction with situations in which he would not seek authorization from Congress for military action, President Obama said “I put it before Congress because I could not honestly claim that the threat posed by Assad’s use of chemical weapons, on innocent civilians and children post an imminent — posed an imminent direct threat to the United States.”

“Candidate Obama said ‘an actual or imminent threat to the nation,’” Henry said, referring to then-Senator Obama’s response to a 2007 Boston Globe questionnaire. “Do you believe that exists?”

“I believe, absolutely, allowing the use of chemical weapons on a significant scale to take place, without a response, would present a significant challenge,” Carney said, with a hesitation, “or threat to the United States’ national security.”

“Not just our allies in the region, but the United States?” Henry asked.