What Else Could Whitman and Fiorina Have Done with $217 Million? Daily Beast Runs the Numbers 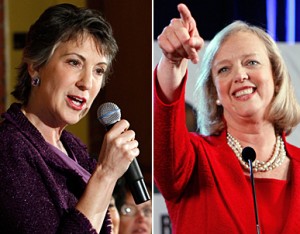 Meg Whitman, Carly Fiorina, and Linda McMahon ran three very expensive campaigns for office — but despite the massive amounts of money poured into their campaigns, none successfully won their race. Together, their campaigns cost a whopping combined total of $217 million — and a large chunk of each of their campaigns was self-financed. In the Daily Beast today, Gail Sheehy runs the numbers to explore what else could have been done with $217 million.

Whitman’s spending could have bought full tuition for 23,553 California residents at the University of California-Berkeley, which would almost double current undergraduate enrollment. She could have made 95,764 connections for at-risk youth through Big Brothers Big Sisters of Greater Los Angeles. Or, if she wanted to be known as the Savior of San Jose, she could have wiped out the megalopolis’ budget deficit twice over.

Too bad that woman didn’t tell Fiorina her total campaign spending could have doubled the total assets of Goodwill of Southern California. It could have fully funded Pajaro Valley Unified School District for a year, saving the schools’ sports programs. Or, if Fiorina wanted to befriend folks closer to her mansion in Northern California, she could have increased the budget eight-fold of Raphael House, which provides low-income family services and shelter in San Francisco. Maybe she would have earned more headlines if she’d used her campaign budget to go global and purchase one million bed nets to combat malaria in Africa or provide micro-loans to more than 350,000 small businesses in South Africa, most of them to poor women.

McMahon, who laid out $41 million during her run for senator of Connecticut, and her partner-husband had amassed a net worth estimated at at least $1.1 billion as of 10 years ago. Each of the 498,306 votes cast in her favor cost $84.08. That would have covered a full year’s worth of salary and benefits for 802 state employees facing furloughs because of the state’s budget shortfall. It could have provided heating assistance to Connecticut families in need for seven years. It could have paid for 15 million school lunches across the whole country, or paid for two years of enhanced security for our troops in Iraq.

Read the full story at the Daily Beast here.