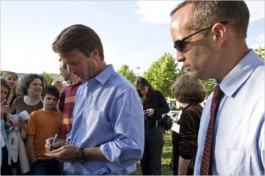 Ten days ago the New York Times ran a A-1 takedown piece on John Edwards that included a number of shocking allegations which, combined with the placement the NYT gave the story, pretty much ended any chance Edwards had of making a return to the political world. Not that there was much chance left, but still.

The original article, which revealed among other things that Edwards had promised his mistress (and alleged mother to his child) Rielle Hunter that “after his wife died” he would “marry her in a rooftop ceremony in New York with an appearance by the Dave Matthews Band,” relied heavily on revelations made in a book proposal (something I took great issue with) by former Edwards aide Andrew Young. Young was described in the piece as “once a close aide to Mr. Edwards, who had initially asserted that he was the father of Ms. Hunter’s child…Mr. Young, who has since renounced that statement.” Despite relying so heavily on his book proposal — which the NYT neglected to mention had been sold in June, a rather significant plot point — very little background was provided on Young beyond that initial description (readers were left to draw their own conclusions about a married father of three who would claim paternity to a child and then opt to rescind it later on). Well, fear not, Politico has done the dirty work!

Next: What Politico dug up on Andrew Young