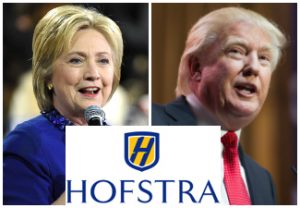 After a campaign season that has seemed like it has gone on for years and years, we are finally just a day away from the very first Presidential debate. On the stage Monday night will be the two candidates representing the major parties — Hillary Clinton of the Democrats and the GOP’s Donald Trump — going head-to-head live from Hofstra University in Long Island.

All debates are from 9-10:30 PM Eastern and will be airing on all major networks (NBC, CBS, ABC, PBS, CNN, Fox News, Fox Business, CNBC, MSNBC, Univision, and C-SPAN) simultaneously. Mediaite will have livestreams available online to watch below.