When it Comes to Presidential Candidates, Do Personal Actions of 25 Years Ago Really Matter?
Opinion

When it Comes to Presidential Candidates, Do Personal Actions of 25 Years Ago Really Matter? 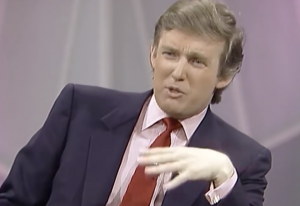 So as the headline already gives away, the question of the day is this:

Do the personal, not political, but personal actions of someone 25 years ago — outside of committing a major crime — resonate in any capacity with the general public?

The question is prompted, of course, by a Washington Post report today that Donald Trump used to impersonate his own spokesman to brag about himself to reporters. Of course, Trump denies the voice on the tape obtained is him in a testy interview with NBC’s Savannah Guthrie this morning and scolded the Today anchor for even broaching the topic as the first question of his interview. Said report is likely the first of many if the cadre of Post reporters (20) assigned to dig up everything in Trump’s past is any indication (still no word on how many reporters are assigned to the likely Democratic nominee, but here’s betting it ain’t close to 20).

Update: The paper now says — in responding to Fox’s The Five — that the same number of reporters have been assigned to investigate Clinton. It’s still not clear why Bob Woodward only mentioned Trump when broaching the 20 reporter investigation. Only after two days and notable blowback did the paper decide to be “transparent.” Check.

Regardless, will anyone — voters outside the bubble — care about this latest revelation? Trump once declared he could walk out onto 5th Avenue and shoot somebody and most people now backing him still would. And based on everything we’ve seen for these crazy 11 months since that now infamous escalator ride down to his announcement at Trump Tower… the McCain insult, the Carly insult, the Megyn insult(s), the revelations about Trump University, the Heidi Cruz insults, the insults of basically every GOP candidate once in the race (Jim Gilmore somehow escaped unscathed), the softening of stances and outright flip-flops on others, know this: It all doesn’t matter. His numbers keep going up despite historically high unfavorables that somehow best his authenticity-and-truth-challenged opponent in Hillary Clinton. In the end, many people like the Trump brand and are will to forgive if the contents keep changing inside. And despite being caught in more than a few lies, he still somehow keeps an aura of authenticity to him. Don’t bother applying logic here… this is what it is.

Several polls this week — and yes, it’s still early with 178 days to go — show Trump essentially tied with Clinton both nationally (Reuters dead heat at 41-40 with 19 percent undecided) and in key states such as Florida, Pennsylvania and Ohio (Quinnipiac). The Trump train just keeps moving along, and you have to start to wonder if the Post — by assigning so many reporters to one person clearly in the interest of taking him down — isn’t playing right into Trump’s hands. Per his interview with Fox’s Sean Hannity Thursday night:

“Every hour we’re getting calls from reporters from The Washington Post asking ridiculous questions. And I will tell you, this is owned as a toy by Jeff Bezos … Amazon is getting away with murder, tax-wise. He’s using The Washington Post for power so that the politicians in Washington don’t tax Amazon like they should be taxed.”

And earlier today with the aforementioned Guthrie:

Trump: Wow. You mean you are going so low as to talk about something that took place 25 years ago, about whether or not I made a phone call? I guess you’re saying under a presumed name.

Guthrie: Yes, under a presumed name.

Trump: Okay. The answer is no. Let’s get on to more current subjects. I know it’s wonderful for your listeners, but we have more important things to discuss.

The whole thing brings back memories of 2008 and a tactic then-Hillary Clinton chief strategist Mark Penn of repeatedly mentioning President Obama’s past cocaine use while in college (which he wisely admitted to in his memoir, Dreams of My Father).

Per MSNBC’s Hardball in December of 2007:

CHRIS MATTHEWS: David Gregory, the old slogan was, “Things go better with Coke.” Who’s this issue helping? Is it helping Barack, being the victim of what looks like a dirty attack, or is it helping Hillary by diminishing the electability quotient of Barack Obama next November?

DAVID GREGORY: Well, if that’s her intention, if that’s the Clinton campaign’s intention, they seem to be missing the mark here. The question of his electability, of his strength and his experience — that’s exactly where they want to attack him, but that’s not what’s happening now.

I mean, what was striking last night on this program is that here is Hillary Clinton’s chief strategist — not just message man, strategist, her guru, besides her husband, the guy who has predicted historic female voting patterns for Hillary Clinton, the guy who’s written a book about all the microtrends in the country — and yet he’s on this program, and he’s saying, “Well, we’re not raising the cocaine issue,” even though he says “cocaine” twice. He basically says that “he” — Obama — “started getting mean before we did,” and that, “Oh, by the way, he’s too ambitious,” something that nobody would accuse the Clintons of.

So if that’s a sign of where their campaign is —

GREGORY: — on the heels of Bill Clinton attacking the press and misstating his position about the Iraq war, it’s a sign of defensiveness.

So did voters care about Mr. Obama’s drug use 25 years prior? Not one bit. It got chalked up as a college thing and if anything, it only made the Clinton campaign — which already knew it was in big trouble — look somewhat desperate for even broaching it.

Same goes here with this Post report about Trump: Did he call reporters in the early 90s to brag about himself? Hard to put that past him. But is this really what one of the nation’s top newspapers is going to be offering up for the next 178 days? And if it doesn’t do likewise to Mrs. Clinton — who likely has a full closet of her own — will it only embolden Trump’s argument that the media is corrupt?

Do the personal, not political, but personal actions of someone 25 years ago — outside of committing a major crime — resonate in any capacity with the general public? The bet here is no if the last open election season is any indication… especially with something as flimsy as what the Post just breathlessly reported as a big story on its once-hallowed pages this morning.

With Trump, there are plenty of areas to scrutinize — particularly when it comes to policy specifics and changing positions.

The Post can do so much better, but really hurt is credibility moving forward when it comes to Trump on this one…