Where Were All the Electoral College Haters When Hillary Was Going to Win?
Opinion

Where Were All the Electoral College Haters When Hillary Was Going to Win? 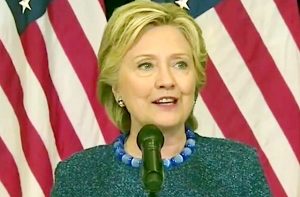 In what is perhaps the most predictable development ever in American politics, the fact that Donald Trump won the presidential election while Hillary Clinton won the popular vote has led to a harsh backlash against the electoral college. The New York Times states that it is “hated by many,” asking “why does it endure?” Here at Mediaite, our own Dan Abrams wrote about how the process is “rigged.” “American voters did not let us down”, DNC field director and longtime Clinton aide Adam Parkhomenko tweeted. “The electoral college did.” That sentiment was echoed by the thousands of Clinton supporters who took to the streets to protest Trump’s win.

As it happens, I favor the electoral college. Our system wisely has dozens upon dozens of checks on the ability of a raw majority to enforce their will on the minority. It’s also undemocratic that that president can overrule the will of the much more representative Congress, or that unelected judges can overrule them both. For that matter, it’s undemocratic that we have elected representatives at all, rather than ruling by majority rule.

Ultimately, the United States is just that, a federation of states. The electoral college– like the Senate or the geographical distribution of the House of Representatives– is intended to ensure that urban, high-population states cannot dominate rural and suburban areas. In the long term, that has a moderating effect on American politics; most presidential candidates need to build a coalition of Americans from all walks of life in order to win election.

In my lifetime, there have been two major, widespread outcries about how we should do away with the electoral college. Both outcries came after the Democratic nominee for president lost the electoral college but not the popular vote, and both came overwhelmingly from people who wanted that Democratic nominee to win. I don’t doubt that the frustration felt by many Clinton voters is legitimate, but it’s difficult to divorce their intellectual arguments from the obvious political maneuvering.

It doesn’t help that many of the loudest voices appear to have given little thought to the issue. One angry Clinton supporter told CNN last night that she should challenge the electoral college at the Supreme Court. Yeah, go for it, Hillary! Good luck arguing that the constitution is unconstitutional.

I don’t mean to pick on liberals. There were some equally transparent and embarrassing arguments dismissing Bill Clinton‘s election in both 1992 and 1996. Clinton’s victories were a fluke, we were told, because he never won a majority of the popular vote and only won because third party candidates drained Republicans’ support. It was liberals who set the haters straight back then.

Were the situation reversed today, yes, no doubt it would be Trump supporters beclowning themselves. In fact, we know that would be the case…

But if the electoral college system is really so undemocratic, illiberal, and outdated, I don’t understand why the outrage is happening now instead of being sustained for the past, oh, two hundred years. There has always been a low-key grassroots movement to do away with the electoral college, but there sure seems to be a lot of Johnnies-come-lately.

My message to the newest choir of pundits and hot-take proprietors is this: how about next time tell us how evil the electoral college is before the election, so we can have an earnest conversation about the pros and cons without it being colored by current events? Why is one of the key elements of American democracy never debated until it becomes a convenient political football?

The true irony is that Clinton supporters have become everything the media claimed Trump supporters were. Not to pick on Dan (who, to his credit, has been very consistent, also calling out Democratic superdelegates for being undemocratic), but I can only imagine the reaction if I wrote a front-page column calling the election “rigged” after a Clinton win based on centuries-old rules that everyone knew and agreed to ahead of time. I would justifiably be accused of delegitimatizing a president before they even took office… and delegitimizing the first woman president, I’m sure many liberals would stress.

Clinton knew the rules, she just played with a losing strategy. Concerned about dissatisfied Bernie fans and losing Obama voters, she moved her party sharply to the left. She met with Black Lives Matter activists and ignored her husband’s advice to meet with white Catholics. She promised to put coal miners out of business during an election where Pennsylvania was a key state. She did a very, very good job of increasing her electoral share in states and communities she was always going to win while denouncing the rest as deplorable. Obama visited every single state in his first run; she never even visited Wisconsin.

In short, Clinton ran precisely the kind of campaign the Founders implemented the electoral college to prevent. At some point, the blame for that lies with her. Allow me to disagree with Ice-T: don’t hate the game, hate the player.