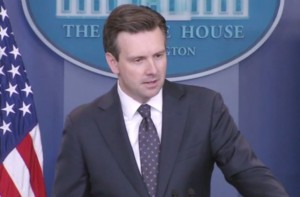 In the midst of this agonizing election season, a new report about money the U.S. gave to Iran is causing a firestorm among Republicans today.

According to The Wall Street Journal, those four Americans who were detained in Tehran were released earlier this year around the same time as the White House arranged a $400 million payment to Iran.

The payment was apparently made as part of a massive settlement between the U.S. and Iran that President Obama alluded to at the time.

And as the State Department now says, the two decisions were not linked:

“As we’ve made clear, the negotiations over the settlement of an outstanding claim…were completely separate from the discussions about returning our American citizens home,” State Department spokesman John Kirby said. “Not only were the two negotiations separate, they were conducted by different teams on each side, including, in the case of The Hague claims, by technical experts involved in these negotiations for many years.”

Republicans, however, are absolutely furious and decrying it as a ransom payment:

Obama administration sent plan load of cash to #Iran as ransom as part of deal on hostages. Just unreal. https://t.co/UHfdK4BEyN

Reported that @POTUS paid Iran $400M in pallets of cash as US hostages released. Still having to hide facts of deal. https://t.co/51fHSmJNHg

Since the cash shipment, the intelligence arm of the Revolutionary Guard has arrested two more Iranian-Americans. https://t.co/vQ4J0YaFrL

Your tax dollars at work: Obama sends $400 million in cash to the leading state sponsor of terrorism. #Iran https://t.co/mymfSvMQvS

Cash for hostages? A violation of all agreements? An example of how the Iran deal increases risk and weakens America. #IranDeal #Iran

It seems the Obama Administration again capitulated to #Iran and went to great lengths to try and cover it up.

RT if you agree → The public deserves an explanation of the lengths the admin went to in order to accommodate #Iran. https://t.co/Eiuh6naRnQ

Obama Admin secretly gave the Iranians $400M at the same time 4 Americans were released from their custody https://t.co/2BVbG56bCP

White House Press Secretary Josh Earnest insisted today this was not a ransom payment, saying they’re “resolving a long-standing claim” and “the United States does not have a banking relationship with Iran”:

.@PressSec on settlement w Iran that @POTUS, @JohnKerry, & others described at length when we announced it in Jan: https://t.co/XyDP9AXcoG

Though as multiple people have noted, there are still Americans being held in Iran: