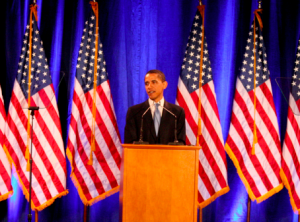 While the White House denies any involvement in the forced resignation of USDA official Shirley Sherrod, CNN is now reporting that a White House source says that President Obama was briefed on the situation, and that he “fully supports the decision.” This is in stark contrast to the Barack Obama who showed such a deft grasp on race issues in America in his redemptive speech on race during the 2008 campaign. In fact, Sherrod’s full speech can’t help but remind me of that incredibly tough, courageous address.

For me, that speech was so resonant because of his empathy for the racial resentments of white people, which he explained in a way that I had never heard before:

In fact, a similar anger exists within segments of the white community. Most working- and middle-class white Americans don’t feel that they have been particularly privileged by their race. Their experience is the immigrant experience – as far as they’re concerned, no one’s handed them anything, they’ve built it from scratch. They’ve worked hard all their lives, many times only to see their jobs shipped overseas or their pension dumped after a lifetime of labor. They are anxious about their futures, and feel their dreams slipping away; in an era of stagnant wages and global competition, opportunity comes to be seen as a zero sum game, in which your dreams come at my expense. So when they are told to bus their children to a school across town; when they hear that an African American is getting an advantage in landing a good job or a spot in a good college because of an injustice that they themselves never committed; when they’re told that their fears about crime in urban neighborhoods are somehow prejudiced, resentment builds over time.

Shirley Sherrod did something that few people have the courage to: she faced her own racial demons, conquered them, and had the audacity to share that experience with others. She was fired for her trouble.

Agriculture Secretary Tom Vilsack, aware of the context of her remarks, seems to feel that she’s guilty of an unforgivable sin, saying “her decisions, rightly or wrongly, would be called into question making it difficult for her to bring jobs to Georgia.”

Rightly or wrongly? Do right and wrong mean nothing anymore? Am I to believe that President Obama supports this notion, that this redemptive anecdote constitutes an irremovable stain? The same Barack Obama who said that he could never disown his “white grandmother – a woman who helped raise me, a woman who sacrificed again and again for me, a woman who loves me as much as she loves anything in this world, but a woman who once confessed her fear of black men who passed by her on the street, and who on more than one occasion has uttered racial or ethnic stereotypes that made me cringe.”

The same Barack Obama who said “I suppose the politically safe thing would be to move on from this episode and just hope that it fades into the woodwork.”

The fact is that the comments that have been made and the issues that have surfaced over the last few weeks reflect the complexities of race in this country that we’ve never really worked through – a part of our union that we have yet to perfect. And if we walk away now, if we simply retreat into our respective corners, we will never be able to come together. Gotcha. That was Barack Obama, too.

It is true that if Sherrod remained at USDA, her remarks might one day be wielded against her, but whatever effort would be expended in her defense, at such a time, would be a bargain when compared to the cost of letting this injustice stand. The President should demand that Sherrod be re-hired, and Vilsack should apologize.

I would also respectfully note that, rather than declare Andrew Breitbart the big winner here, the media owe it to our constituents to also consider right and wrong before we pass judgment.

Update: Since writing this commentary last night, I have received the following statement from Secretary of Agriculture Tom Vilsack, which seems to indicate that a reversal of his decision is possible:

WASHINGTON, July 21, 2010 – Agriculture Secretary Tom Vilsack tonight released the following statement in response to the release of remarks in video from Shirley Sherrod:

“I am of course willing and will conduct a thorough review and consider additional facts to ensure to the American people we are providing services in a fair and equitable manner.”

Note: This headline has been updated since publication.