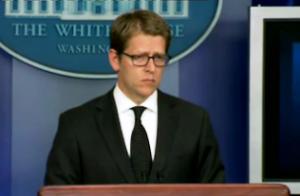 During Wednesday’s briefing, White House Press Secretary Jay Carney was questioned about the administration’s handling of and response to the attack on the U.S. consulate in Benghazi. Carney — in light of today’s congressional hearing featuring eyewitness testimony — decried “attempts to politicize” the issue. The initial review was unsparing, he stated.

“This is a subject that has from its beginning been subject to attempts to politicize it by Republicans, when in fact what happened in Benghazi was a tragedy,” Carney replied when asked about the hearing. The Accountability Review Board issued an “unsparing and highly critical” report, he reminded, adding that the administration has been acting on every single recommendation it put forth.

Asked why critics are going after then-Secretary of State Hillary Clinton, the press secretary replied, “I’m not sure that they are.” He further asserted that the White House is confident that Clinton handled the situation appropriately — again referencing the ARB report.

Later in the briefing, getting more specific, Carney was asked to respond to the issue of edited talking points (which UN Ambassador Susan Rice went off for her Sunday show appearances). Any edits the White House made were “stylistic and non-substantive,” he said. “We’ve been very clear about the specific edits that were made at the suggestion of the White House.”

Carney repeated the “attempt to politicize” the issue, deeming it “part of an effort to chase after what isn’t the substance here.” The substance, according to him, being: the consulate was attacked, four Americans were killed, and the president is committed to ensure it doesn’t happen again.

As for the president, Carney suggested it’s unlikely Obama was watching the hearing since he “tends not to watch TV during the day.”