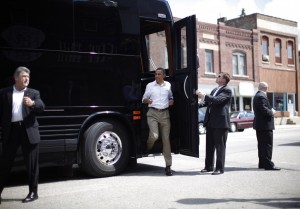 Earlier today, conservative radio giant Rush Limbaugh promoted a bizarre conspiracy theory about President Obama‘s mid-August Midwest bus tour, saying that the whole thing was faked, and that the President didn’t actually ride the buses, but had them flown from stop to stop. Despite the sheer idiocy of the story, I reached out to the White House for comment. Press Secretary Jay Carney‘s response is unequivocal in its rebuttal of the story, and outright mockery of same.

The story is ludicrous on its face, as there was a throng of reporters along for the ride, filing stories from one of the buses, but since it was late in the day, I dashed off an email to Carney before I really had a chance to really read it. I don’t usually do this, but I don’t want anyone to think that I gave this story a second’s credence, so here’s what I wrote to Carney:

there’s some idiocy bubbling up on the right that the President really didn’t ride the bus during his tour, and that the buses were flown from stop to stop. Do you have any background on how/when the buses were transported? Any reaction to this crap?

Carney’s reaction was pretty similar to mine:

Hmm. I THOUGHT we were driving when we on the bus. But maybe it was all an elaborate ruse. Maybe we were actually flying, and I didn’t realize it, and the things we saw out the bus windows — the cornfields and small towns and folks lining the streets waving American flags — were actually filmed images projected onto the inner walls of a C-17 cargo plane. Ah-ha!

We rode the bus the entire three days. Only flights were outbound from JBA to Minneapolis that Monday and return from Peoria on Wednesday.

If this story says anything, it’s that conservative conspiracy theorists need to learn to dream bigger. From faking the moon landing, we’ve come to this? Really?