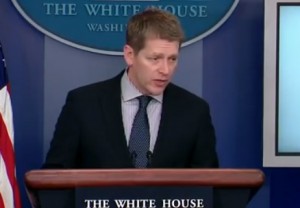 The imaginary specter of imaginary terrorist-sympathizers “Friends of Hamas” reared its hilarious head at Thursday’s White House press briefing, as White House Press Secretary Jay Carney name-checked the Breitbart News-promoted group in response to a question about demands that former Senator Chuck Hagel’s (R-NB) nomination for Secretary of Defense be withdrawn. The “Friends of Hamas” story has shone a spotlight on conservative gullibility, and on conservative media diligence, but Carney’s reference to the group also demonstrates the value of the recently-much-maligned White House press corps, which never even nibbled on this story.

Senator Chuck Hagel’s (R-NE) contentious pending confirmation as Secretary of Defense took a detour when a “Breitbart News” story published two weeks ago, entitled “Secret Hagel Donor?: White House Spox Ducks Question On ‘Friends Of Hamas,’” raised questions about the gullibility of Republicans like former Arkansas Governor Mike Huckabee and current Senator Rand Paul (R-KY), as well as The National Review’s Andrew McCarthy, and Fox Business’ Lou Dobbs. No one could quite figure out the imaginary group “Friends of Hamas’” origin story, however, until The New York Daily News’ Dan Friedman revealed that he accidentally invented them by sarcastically asking a Republican Senate aide if they had anything specific on Hagel’s speech-giving past, perhaps ties to the “Junior League of Hezbollah, in France,” or “Friends of Hamas?”

The discredited story has been roundly mocked by the media for much of this week, and on Thursday, Press Secretary Jay Carney, a former journalist himself, got in on the act. CNN’s Jessica Yellin asked Carney about a letter from 15 Republican Senators, demanding that Chuck Hagel’s nomination be withdrawn.

“What’s the White House’s response to a letter from 15 Republican senators calling for the President to withdraw the nomination of Chuck Hagel to be his Defense Secretary?” Yellin asked.

“There is so much I have to say about that,” Carney began, with a smile. “First, I would point you to Senator Shelby’s comments this morning that he will support Senator Hagel’s confirmation. He joins other Republicans, like Senator Johanns and Cochran. And I would also point you to Republican senators from the weekend shows who said they will support an up or down vote next week when the Senate returns, on Senator Hagel. Even Senator Hatch said this morning, ‘I don’t think we should filibuster Cabinet appointments.’ And we certainly agree with that sentiment. It’s been expressed by many others.”

“It is unfortunate, however, that some Senate Republicans put political posturing ahead of our nation’s security” Carney continued. “For the first time in American history, Senate Republicans filibustered a nominee for Secretary of Defense — a member of their own party, a decorated combat veteran, and the right leader for our troops. A clear majority in the U.S. Senate supports Senator Hagel’s confirmation. So today’s actions that you refer to run against both the majority will of the Senate and against our national interest.”

Carney went on to excoriate Republicans for keeping Hagel off the job while our troops remain at war, and for making him miss an important NATO summit in Brussels.

“And just to be clear,” Yellin asked, “he won’t be withdrawn?”

“Absolutely not,” Carney replied. “Any suggestion to the otherwise — to the contrary might have been found in the minutes of the meetings of the Friends of Hamas.”

The crack took a few seconds to sink in, but eventually got a big laugh. The reference to “Friends of Hamas,” a story that conservative politicians and media organizations have been pushing for weeks, was the first such reference at any White House briefing. Despite a mountain of misguided criticism over their legitimate complaints about access, the White House press corps, including many conservative outlets, resisted this false story when others could not. It’s easy for people who don’t know the beat, and only pay attention to it when others are piling on, to criticize White House reporters, but even on their worst day, they’re sharper than most of the knives in the media drawer.

Here’s the clip, from the White House: