White House Responds To ‘We The People’ Petitions, People Respond With Petitions To Take Petitions Seriously 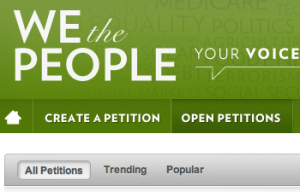 Most people would agree that a more open government is a good thing for our democracy. The ability to bring your issues directly to political leaders is a way to ensure that voices are heard and the concerns of average Americans are being addressed. Last month, the White House launched “We The People,” an online platform where people can create and sign petitions. If 25,000 people sign a petition within 30 days of it being posted, the website pledges to have someone in the Obama administration issue a public response.

Over the past week, the White House has released its first batch of responses, and they do not disappoint! Except for all the people they disappoint. One of the responses, titled “What We Have To Say About Legalizing Marijuana,” was in response to eight separate petitions. The petition “Legalize and Regulate Marijuana in a Manner Similar to Alcohol” alone received over 74,000 signatures. The other petitions address other marijuana-related positions like declaring legalization a states’ rights issue and acknowledging the benefits of medical marijuana. The response is attributed to Gil Kerlikowske, the administration’s “drug czar.”

Like many, we are interested in the potential marijuana may have in providing relief to individuals diagnosed with certain serious illnesses. That is why we ardently support ongoing research into determining what components of the marijuana plant can be used as medicine. To date, however, neither the FDA nor the Institute of Medicine have found smoked marijuana to meet the modern standard for safe or effective medicine for any condition.

As a former police chief, I recognize we are not going to arrest our way out of the problem. We also recognize that legalizing marijuana would not provide the answer to any of the health, social, youth education, criminal justice, and community quality of life challenges associated with drug use.

That is why the President’s National Drug Control Strategy is balanced and comprehensive, emphasizing prevention and treatment while at the same time supporting innovative law enforcement efforts that protect public safety and disrupt the supply of drugs entering our communities.

Factoring in any potential overlap between the similar petitions, at least 100,000 individuals were intent on bringing their concerns to the White House on this issue. But in the end, the White House’s response was really just a rehashing of their position on the issue from the beginning. So… is government more open now?

In fairness, no one should really be surprised by the standard responses. In the official YouTube video announcing the online venture, the narrator mentions that the White House will issue a response after sending the petition to policy experts like Kerlikowske. Two separate petitions calling for the removal of all references to God in the Pledge of Allegiance and U.S. currency (with over 30,000 signatures between them) were addressed by Joshua DuBois, the White House Executive Director of the Office of Faith-Based and Neighborhood Partnerships. DuBois basically reiterates the standard position of any moderately religious person in public office: there is a separation of church and state, but religion is part of the American identity.

The White House also issued responses to petitions focusing on student loan debt, a FairTax system, and the issue of judicial misconduct in the case of Sholom Rubashkin. And on that last point, the White House response is actually titled “Why We Can’t Comment.” The responses are of the “we hear you and we thank you for your input; now let us explain what we want to do” variety.

But one new petition, published in response to the White House’s canned responses, has gained several thousand new followers over the weekend: “Actually take these petitions seriously instead of just using them as an excuse to pretend you are listening.”

Although the ability to submit petitions directly to the White House is a noble and welcome new feature of the current administration, the first round of responses makes blatantly clear the White House intends to just support its current stances and explain them with responses everyone who has done any research already knows.

An online petition is not meant as a replacement for using a search box in a web browser. We the People, those who grant you the power to govern in the first place, are requesting changes in policy directly, circumventing legislators who already do not listen to us. We the People request you govern FOR us, which means actually listening to us and actually acting in our interests instead of special interests.

You are not above us. You ARE us. Govern accordingly.

As of posting time, this petition has between six and seven thousand signatories. Clearly this group is made up of people who want government to be more open and people who think it would be funny to see the White House respond to this. And admittedly, there is something amusingly meta about the concept of creating a petition about petitions.

But if nothing else, there is one defining political goal the Tea Party and Occupy Wall Street have in common: they want politicians to actually listen to what they have to say, and when they do, their responses should be more genuine. That, if nothing else, is the problem with “We The People.” The responses the White House has issued sound just a wee bit condescending, and have clearly been worked on by speechwriters and policy wonks to be as broad and non-controversial as possible. It’s a stump speech rebranded as seeming interest in the concerns of average voters. Even if you agree with what the White House is saying, you can’t help but note what a remarkable distance the response is from what was actually addressed.

Obviously, just because 25,000 people sign a White House petition does not automatically mean the administration should start advocating for that policy right away, but it deserves a little more attention than what is essentially a Wikipedia article followed by “Hmm… no.”

The next generation of voters cares less about how well politicians stick to their talking points and more about how genuine they sound. If all you give them is political doublespeak, they’ll see right through it. Open government is only good if it’s actually open and you’re not just creating the appearance of open government to make people think their opinions matter to those in power. Because if all you have in return is canned responses, what’s the point? If at the end of the day, not a single person or petition has changed the minds or influenced the decisions of the people running our government, what exactly was accomplished? It’s great to have an open government, but it’s also nice to have an open mind.