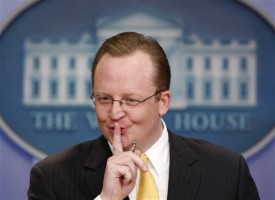 I think I got some good news about the public option today.

At today’s White House Press Briefing, the subject du jour was the Obama administration’s supposed shift on the public health insurance option. This was to be “that question,” the one that gets beaten to within an inch of its life at every briefing.

While Gibbs repeatedly explained to everyone that I was right yesterday, I thought I actually detected something new during a Gibbs exchange with CNN’s Ed Henry:

The President — his position, the administration’s position is unchanged; that we have a goal of fostering choice and competition in a private health insurance market. The President prefers the public option as a way of doing that. If others have ideas, we’re open to those ideas and willing to listen to those details.

It took place during a rapid-fire exchange, but it stood out to me. I asked Gibbs about my read on it later in the briefing:

TC: I wanted to follow up on something you were saying to Ed, because you have consistently said — at least since I’ve been here listening to you answer this question — that the President strongly supports a public option but that it’s not a deal-breaker. That’s been pretty much the position all along. But when you were talking to Ed it sounded like you were saying now that he’s open to other, better ideas. Does this mean that the administration’s position is it has to be public option or better?

MR. GIBBS: Well, again, the President will evaluate this idea or any idea based on the degree to which it satisfies the goal of choice and competition. If there is a mechanism whereby greater choice for consumers can be had through increased competition among private insurers as it relates to some policy idea, he will look at that, evaluate it, and make that determination.<

MR. GIBBS: The President would have to be satisfied that any idea contained in any final legislation met the strong goals of providing that choice and competition.

Coincidentally, I also asked Gibbs a question about poker, in the interest of my Asylum readers. As it turns out, I think I may have discovered the White House’s “tell.”

In poker, when a player has a really strong hand and he wants to maximize his winnings, he “slow plays” it. By putting his opponents at ease, even allowing them to think they are winning, right up until he turns over his aces. I think all of the White House’s talk of “preferring” a public option, but it not being a “dealbreaker,” has been just such a play. When they say it’s “not a deal-breaker,” they don’t mean they’ll accept something less as a compromise (as implied), but rather that they will consider any idea the President likes more than the public option.

It all gelled for me as I discussed it, after the briefing, with some other reporters. The President is no idiot. He is well aware that failure to pass the public option, with the majorities his party has, and the public support the plan has, would be devastating to his credibility as a leader. He (pretty much) has the votes to pass it on reconciliation, so why tip his hand now?

Let the Republicans and their squeaky town hall wheels spin in the death panel mud, thinking they’re making progress, right up until Obama turns over those aces. You heard it here first, the public option will pass.

Tommy Christopher is a freelance writer, blogger, and online journalist based out of New Jersey and Washington, DC. He has covered the progressive political scene and the historic 2008 elections, including live coverage from the Democratic National Convention in Denver, and becoming a freelance White House reporter in early 2009. This move follows a year in which he was able to break a number of big stories and was quoted in print and online by everyone from the LA Times and the New York Times to the Huffington Post and Hot Air. Tommy can also be found at his own blog: DailyDose.us. Follow him on Twitter here.