Who Do You Trust On The Sequester? The President, Republicans or…Bob Woodward?

Who Do You Trust On The Sequester? The President, Republicans or…Bob Woodward? 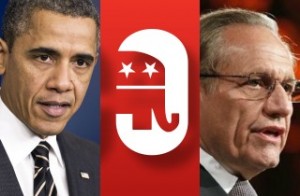 In yet another countdown to America’s Armageddon (the Sequester Showdown), the whole narrative, tone and finger-pointing only brings two things to mind:

I saw the former on its opening night in 2009 and immediately declared it one of the best comedies ever (Animal House, Caddyshack, Stripes, History of the World, Beverly Hills Cop, There’s Something About Mary, Office Space, Anchorman and Superbad are also in my Top 10). Upon walking out of the theatre, I remember thinking how it was so original (a comedy disguised as a mystery that went forward, backward and forward again), patently hilarious (the revealing photos during the closing credits had people literally doubled-over) and–a rarity in comedies–actually unpredictable.

The Hangover II, as most sane people will tell you, is exactly the same friggin’ movie. It made no effort to be different (besides changing location)…even the jokes and delivery were identical. The ending, as a result of the whole concept of the first movie being copy and pasted, was more predictable than your average daily Sean Hannity looped diatribe (“23 million unemployed, 47 million on food stamps, 16 trillion in debt…”).

And yes, The Hangover III, The Search For Another Easy $300 Million, will be coming to a theater near you this summer.

For the purposes of this column, The Fiscal Cliff is The Hangover, Part I: It had a built-in climax (Countdown to the Cliff clocks…complete with days, hours and minutes to the apocalypse featured as a perpetual graphic on most cable news stations) a solid plot (compromise or become Greece) and plenty of reality-show passive-aggressiveness (too many examples to mention). From a political-entertainment perspective, the Cliff was a made-for-TV event. Everyone from CNN to Fox News to MSNBC benefitted.

But in the end, the built-in climax was anti-climactic: Outside of specialized tax hikes on the rich to the tune of $600 billion in new revenue and a payroll tax increase on all Americans, nothing was solved in terms of spending cuts or entitlement reform.

Politically, the President came out the winner here after forcing Republicans to compromise on the tax increase he wanted, although it’s still not clear where that money is currently being allocated: Is it going toward more spending or deficit reduction? Nobody seems to know (or care).

Regardless, conservative media took solace in how the upcoming Hangover Part II/Sequester Showdown would play in the Republicans’ favor. After all, the President had just spent his political capital from his 3.9-point popular vote victory on tax hikes during the Fiscal Cliff, thereby (in theory) finally forcing him to address the massive deficit/debt issue. In a related story, Senate Democrats haven’t passed a budget in nearly four years.

But as we’re seeing now, the President only applies three strategies when negotiating:

And that’s not just my perspective, but that of Bob Woodward, the journalist responsible (along with Carl Bernstein) for bringing down an entire Republican administration almost 40 years ago…

By the way, could you imagine how Woodward would have been treated by conservative blogs if they were around during the Nixon Administration? Left-winger emblematic of media bias, they’d say. Just another journalist with an agenda, citizen guilty of treason, etc.

Back to the future in 2012, Woodward releases a best-selling book chronicling the original (2011) Fiscal Cliff negotiations, complete with interviews with everyone from the President to John Boehner to all the major players who would ultimately do what Washington does best: Kick the can down the road (more on that in a moment).

Woodward’s overall analysis of those negotiations isn’t a pretty one for the President (from The Price of Politics):

More from Woodward, this time on the blame game:

“Then, after making it clear that he blamed Republicans, [Obama] said, ‘Let me repeat … I’m not interested in blame.’

“‘I will explain and defend,’ the president said, adding, ‘I am not trying to cast blame,’ as he cast blame.”

Of course, Woodward himself has been blamed for suddenly holding an anti-Obama bias just for daring to report what he had witnessed as an objective observer. That’s the problem with politics today: Either you’re a sheep and tow the party line, or you’re cast out as the enemy.

Independent thought? Not skewing a narrative to fit an agenda? Applying recorded minutes and interviews—the ingredients Woodward used in his book—that leave little room for opinion or ambiguity?

Who does that anymore?

And that’s what currently makes Woodward a target from liberal media. On cue, The New Republic—a magazine owned and operated by a former Obama senior campaign member—called Woodward “remarkably slanted,” and a biased reporter who “takes pleasure in catching the President in tiny lies.” Because, you know, Woodward has been a neocon teabagger his whole life and stuff, right?

Meanwhile, if you think these “negotiations” in 2013—which consist of a more emboldened (some say, arrogant) President again blaming Republicans for not agreeing to the tax hikes they already agreed to in the Fiscal Cliff–are going to end with a balanced, definitive, long-term solution, you haven’t been paying attention the past three years.

Need proof? Just this week, White House Press Secretary Jay Carney said that lawmakers may find it “better” to postpone the cuts to buy more time to find a solution. Now if only that can could only be kicked a few more times past the next presidential election, it will be somebody else’s problem.

As for Woodward’s take on the sequester as it stands currently, here’s his take on February 21:

“When the president asks that a substitute for the sequester include not just spending cuts but also new revenue, he is moving the goal posts. His call for a balanced approach is reasonable, and he makes a strong case that those in the top income brackets could and should pay more. But that was not the deal he made.”

Will the President finally lead? And if he doesn’t, will the press finally call him out the way Woodward did?

If Woodward’s interview with Larry Summers, a top economic adviser to Mr. Obama who also served as Treasury Secretary under former President Clinton is any indication, don’t bet on it:

The 2013 sequester is like most sequels: It’s supposed to be bigger, badder and better than the original.

But like The Hangover II, when you’ve got the same characters (Obama, Boehner), same plot (agree to higher taxes or the world ends) and another predictable ending (screw it…let’s just buy more time again), it’s hard to take anyone seriously.

The only adult in the room is Bob Woodward, an old-fashioned journalist with the distinct honor of being labeled both a conservative and a liberal, depending on who’s feelings are hurt. And unlike seemingly everyone else in political media, a guy not beholden to the general narratives of a cable network by serving as a host or contributor.

And because he’s one of the dwindling number of journalists free of agenda, it’s wise to trust his opinion here.

Problem is, he’s not even involved in this round of talks. Not even in the room.

And even if he was, he’s just the messenger.