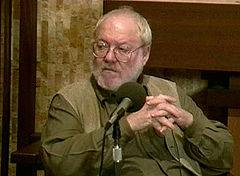 The Discovery Office hostage situation is still a very fluid story that has yet to be resolved. But interesting clues are revealing themselves about the situation. The assailant has been identified as James Jay Lee, and a environmental screed listing “demands” has been published under the domain “SavethePlanetProtest.com” (the full text of which can be read here.) Lee’s MySpace reveals a 43 year-old male who is originally from Hawaii, and an avid reader and fan of the writings of environmental writer Daniel Quinn. So, who is Daniel Quinn?

Quinn is described on WikiPedia:

Daniel Quinn (born 1935 in Omaha, Nebraska) is an American writer described as an environmentalist. He is best known for his book Ishmael (1992), which won the Turner Tomorrow Fellowship Award in 1991.

Quinn himself does not, however, identify as an “environmentalist,” pointing out that the term evokes the notion of something that is “out there,” and somehow “not us.” The typical conception of environmentalism, Quinn argues, is one of a false-dichotomy — a false division that says there’s “the environment,” and then there’s “us humans” living in the environment (and somehow not a part of it)

Quinn has not been immune to controversy. The same WikiPedia page includes the following:

Daniel Quinn offers readers a way out of the dilemma between inattention and blame. It is tough to hold the attention on global problems and still imagine solutions and reasons for hope. Some blame humanity in general, and claim “human nature” necessarily leads to species loss and habitat degradation. In Quinn’s writing, one can find a perspective that is pro-sustainability and pro-human, countering the view that humans are inherently toxic to the world.

While response to Ishmael was mostly very positive, Quinn inspired a great deal of controversy with his claim (most explicitly discussed in the appendix section of The Story of B) that since population growth is a function of food supply, sustained food aid to impoverished nations merely puts off and dramatically worsens a massive population-environment crisis. This crisis is born of a disconnect between local humans and the local habitat with its food. Quinn points out that ending this disconnect is a proven way to avoid famines.