Who is Nicole Mincey? Meet the Trump Fan Everyone Thought Was A Bot

Who is Nicole Mincey? Meet the Trump Fan Everyone Thought Was A Bot 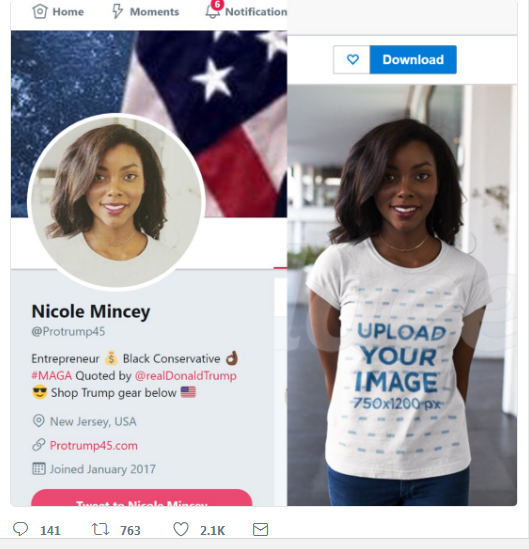 Three things are known for sure: Nicole Mincey is a real person, President Donald Trump thanked @ProTrump45 on Twitter, and Mincey is NOT behind that account. The rest of the story, however, is not that simple.

The interesting part in the story starts on the night of Aug. 5, when President Trump thanked “Nicole” for a tweet from “her” account named “protrump45” that said Trump was “working hard for the American people.”

With such a spotlight being shined onto the account, it didn’t take long for the internet to find the problem with the account: it wasn’t real. The headlines quickly followed, eager to tell the world that our president, the antagonist of fake news, had retweeted a “bot.”

The definition of a Twitter bot is “a software program that sends out automated posts.” So while it turns out the account is fake, it is not a bot.

This was not a sufficient end to the story for Daily Beast reporter Ben Collins, who did some investigative digging and unearthed the real story. The “protrump45” account was linked to the website www.protrump45.com, a website which sells Trump and MAGA merchandise, as well as housing a conservative blog. On that blog, Collins discovered a writer named Nicole Mincey, who had the same backstory that the Twitter account’s Nicole Mincy claimed to have.

Mincey, according to the website, is “black Trump supporter” in Camden, New Jersey who works as entrepreneur for the store. She used to be a Democrat before “the failures of the Obama Administration” caused her to switch political parties.

Collins tracked Mincey down on Facebook, and conducted multiple phone interviews with her to get the full story. Mincey told Collins she started working for ProTrump45 in January, with about 10 other employees. Mincey said two people named Lorraine and William led the company. All worked remotely and never met in person.

According to Mincey, the two created many fake accounts on Twitter to follow their “ProTrump45” account. Soon after Mincey started however, they wanted to make her the face of the account. Mincey didn’t find it for while, as she does not have a Twitter account and by dropping the “e” in her last name, it was hard to find. When she did find it, she yelled at them to take it down. Apparently they went back and forth with this, they would take it down, she would find it again, and repeat. This is most likely when the stock photo came into play. Mincey said it makes “perfect sense, marketing-wise” why they used her identity, because she is a young, black Trump supporter.

Fed up with how Lorraine and William were using her identity, she quit ProTrump45 in June. She didn’t hear from them again until her aunt saw her name on the President’s Twitter account. Which put her back in contact with Lorraine and William, where she told them “Yall not slick. I’ve told yall this before stop using that fake alteration of my name,” according to screenshots she sent Collins. Lorraine responded with “Nicole mincy generates more traffic, sorry hun.”

Collins tried reaching out to Lorraine, but she said she is not doing interviews. He tried searching for a “Lorraine Elijah,” the name on her email, but there was none in Texas, her stated hometown. The phone number and email for William never yielded a response.

So to recap, Nicole Mincey is a real, young, African-American Trump supporter who used to work for ProTrump 45, but she is not the person who ran the ProTrunp45 Twitter account that President Trump thanked.

Oh, and the President still hasn’t deleted his tweet, despite it linking to a tweet that is no longer available.