Well, this might be one of the most “epic” fails in recent memory.

Minnesota Public Radio News producer Emily Kaiser noticed something odd on Esquire‘s digital page this morning. If one were to re-visit their famous “Falling Man” profile, posted on their front page today in memory of 9/11, you would see this little doozy of a sub-section: 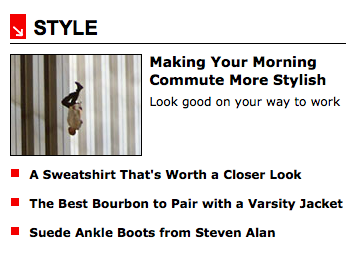 Just in case you don’t quite get what that image shows: It’s the infamous 9/11 “Falling Man” image paired with a headline “Making Your Morning Commute More Stylish.” The sub-hed reads: “Looking good on your way to work.”

Yikes. There are so many things wrong with this. But it was just a glitch.

And, clearly, Esquire did not mean to do this on purpose. If one were to ask the magazine what its most famous piece of original reporting has been over the past few decades, they would undoubtedly point to Tom Junod‘s 2009 exploration of the mysterious “falling man” tumbling to his death in one of the most harrowing photographs taken moments before the World Trade Center was reduced to rubble.

UPDATE: Looks like Esquire removed the right-hand sidebar from the page entirely.

UPDATE II: The magazine tweeted out that the image was due to a “stupid technical glitch.” They kinda-sorta “apologized” for any confusion:

Relax, everybody. There was a stupid technical glitch on our "Falling Man" story and it was fixed asap. We're sorry for the confusion.

Perhaps not the best tone to take with an apology, eh?