A worker at Parsons The New School for Design received a letter in the mail from the FDNY about a payment someone owed for an ambulance ride. Instead of a specific name on the letter, it was addressed to “Unknown Asian.”

Yes, somehow, when EMS workers picked up a patient and, according to The New York Post, transported the person to the Beth Israel Medical Center, they neglected to get an actual name, and so they just did a crap shoot and send it to “Unknown Asian” instead and hope it ended up in the right hands.

Here’s a picture of the letter in question: 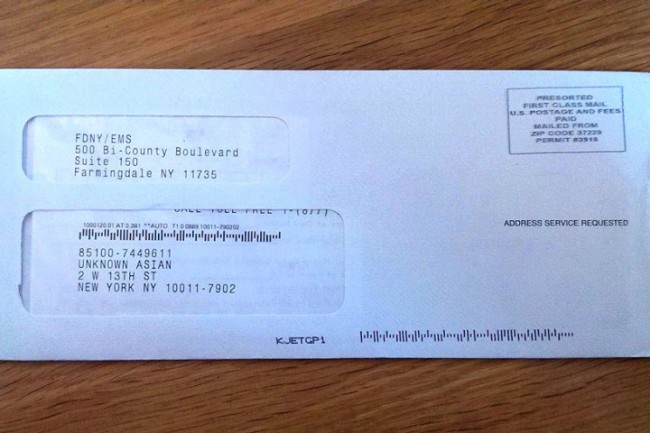 When the female patient was transported at about 3 a.m. on Nov. 1 for a “drug or intoxication” issue, she could not be identified by name but a person accompanying them said the patient lived in a New School dorm so the EMS workers filled out the form with “unknown” for the first name and “Asian” for the last name, the source said.

The form was processed and sent to a fire department billing contractor, which then sent out the oddly-addressed bill.

“It’s a clerical or administration error that the bill was sent out,” the source said.

Parsons The New School for Design is home to many Asian students, so for a while they had absolutely no idea which student it was addressed to.

[Editor’s note: This story has been corrected to reflect that the Christine Ahn named in our original story was not the unknown person treated by the ambulance, nor does she live at Parsons. She was the person who happened to open the envelope to figure out where it should be directed.]