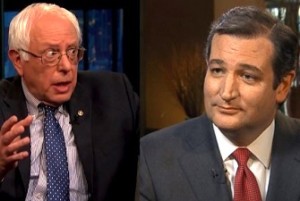 Both are nipping at their respective parties’ frontrunners, both have been tagged as having “radical” positions, and according to The Lugar Center’s “Bipartisan Index,” they are the two least-bipartisan legislators in the U.S. Senate (during her time in the Senate, though, Hillary Clinton never scored higher than 76th). Which of these candidates is the true radical?  Let’s take a look, issue-by-issue.

Bernie Sanders will remind you of his D-minus rating from the NRA, but a few of his positions on gun control have put him in hot water with democratic voters, most of all his continued support for a provision that gives immunity to gun manufacturers. He’s softened his position on that a little bit, but still believes that if gun manufacturers can be sued under any circumstances, it means “the end of gun manufacturing in America,” a sentiment that won him praise from the NRA:

Sanders was joined by 14 Democrats in voting for that bill.

Three words: Machine Gun Bacon. Cruz’s actual positions on guns are exactly in line with every other Republican, which is to say humping them like a Yorkshire terrier on a Viagra bender. Although Cruz doesn’t seem to know what a “machine gun” actually is, we give him this round for sheer gonzo creativity. TED CRUZ WINS

Bernie Sanders believes that health care is a right. By legislative standards, his plan is about as attainable as an erection at a prayer breakfast, but is perfectly in line with the Democrats’ long-stated philosophy, despite Hillary Clinton’s attacks on it.

Ted Cruz thinks not wanting people to die in the streets makes you an a-hole, but his “plan,” which consists of repealing Obamacare, selling insurance across state lines (which guts state insurance regulations), and Health Savings Accounts, are the same as every other Republican’s. Well, the same as every Republican’s after the Republicans invented Obamacare, then abandoned it when it got some black on it.

This is a tough call, Cruz’s has a better chance of success if he’s elected. Crazy is crazy, though, so TED CRUZ WINS

This isn’t really an animating issue for Sanders, who largely campaigns on his vote against the Iraq invasion, and is generally against military intervention. He supports the Iran nuclear deal, and plans to combat ISIS by letting countries in the Middle East lead the effort with U.S. support. His mantra, that the United States should not be the “policeman of the world,” is one that has proponents on both sides of the ideological divide.

Wants to see if we can make sand glow. TED CRUZ WINS

Bernie Sanders’ immigration plan is fairly liberal, with a path to citizenship, reforms to border security that don’t include walls and/or moat monsters, and strong worker protections. His record on immigration, however, has drawn fire from Democrats. He voted against George W. Bush‘s immigration reform bill, but mainly because of guest worker provisions that he likens to slavery, and which he also says hurt American workers by depressing wages.

Sanders has also been attacked over an obscure 2006 amendment that protected the racist Minutemen from something that already wasn’t happening to them. Like many of Sanders’ votes, it was a symbolic move, but it’s fair to ask what exact symbolism he was going for there.

Despite Marco Rubio’s attempt to complicate things, Ted Cruz has consistently been every bit the hard-ass on immigration that Donald Trump is. Cruz will build a wall, end birthright citizenship, and will round up and deport all undocumented immigrants. The latter position has been characterized as a flip, but that’s because the media doesn’t know how to listen to the shifty Cruz, who had previously said he wouldn’t send “jackboots” to knock on Jake Tapper‘s door. That means they can still wear Uggs and knock down brown people’s doors. Unlike Trump, Cruz won’t let “the good ones” back into the country.

This is really no contest. If Ted Cruz moves a millimeter more to the right on immigration, he’ll deport himself. TED CRUZ WINS

Bernie wants to raise taxes on the wealthy and Wall Street speculation to pay for programs like tuition-free public college education and infrastructure spending. He also wants to fund single-payer health care by raising taxes on the middle class, while also eliminating health insurance premiums and large deductibles and copayments.

Cruz proposes a favorite hobby horse of the libertarian right, a flat tax, but his 16% business flat tax has drawn criticism for essentially being a slippery-slope VAT that would create a new form of taxation that future congresses could raise to fund larger government.

Neither plan has a chance of being enacted, but for delivering the deadly sound-bite  “We will raise taxes, yes we will,” BERNIE SANDERS WINS

Sanders favors raising the minimum wage to $15 an hour, and promises to create 13 million jobs through massive infrastructure spending, paid for by closing corporate tax loopholes.

Ted Cruz promises to create 486,000 jobs per year, or as the Obama administration calls it, a good couple of months, simply by gutting regulations, repealing Obamacare, and at least 50 of those jobs will come from approving the Keystone Pipeline.

You have to admire his moxy, but for literally promising to cut job growth by two-thirds of where it already is, TED CRUZ WINS

Obviously, these are matters of opinion that voters will judge for themselves, but there is something important to be learned by examining these two so-called “radicals.” They are often criticized, Sanders especially, for proposing changes that are impractical, that have no chance of actually passing, but looking at how even Ted Cruz’s most out-there positions have significant traction within his party, it becomes clear that your opening bid where you start from, has a whole lot to do with where everyone else ends up.

My bottom line: Ted offers a whole lot more crazy than does Bernie.