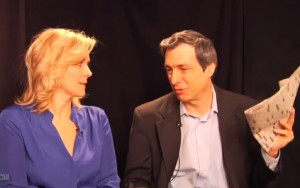 The suspension of Alabama high school coach Bob Grisham for disparaging First Lady Michelle Obama‘s “fat butt” prompted The Washington Post reporter Krissah Thompson to pen a short essay about a pattern of attacks on Mrs. Obama’s posterior by white men, and their cultural significance. The Daily Download’s Lauren Ashburn and The Daily Beast’s Howard Kurtz got in on the act, questioning, not the piggish high school coach, but The Washington Post, asking “Why Is Wash. Post Highlighting Michelle Obama’s Big Butt?”

The crux of Kurtz’s criticism was that Krissah Thompson’s piece was only ostensibly a critique of the attacks on the First Lady, and was really just “an excuse to write about the First Lady’s backside.”

In their brief video commentary, Ashburn defended the piece as newsworthy, while Kurtz derided Thompson’s reference to the “historical antecedents” of these attacks on Mrs. Obama, sarcastically asking “This is sociology?”

Howie notes that “the Post is not accusing the First Lady of having a big butt, it is talking about those who are commenting on the First Lady having a big butt,” but… if you read Thompson’s excellent piece, you’ll notice that nowhere does she accept the premise that Michelle Obama has a “big butt,” whereas Kurtz does so twice in that sentence, and elsewhere in his commentary, and in the headline. He’s criticizing Krissah Thompson for highlighting something she never even mentions, while highlighting it himself, repeatedly.

So, what’s going on here? Here are a couple of useful clues. Sandwiching their media critique of Krissah Thompson are a couple of lighthearted butt moments. In the opening seconds of the video, Ashburn offers a brief rendition of classic DC go-go band E.U.‘s Da Butt, which neatly demonstrates the ability of various booty odes to carbon-date their fans. In her piece, Krissah Thompson references The Commodores‘ Brick House, while folks of certain other ages might confess a compulsive honesty regarding their affinity for big butts, or a desire to zoom-a-zoom-zoom, or even a state of readiness for this jelly. All in good fun, right?

Ashburn then closes out the commentary with a gluteal, maximal pun, telling Kurtz to “Butt out.”

This exercise appears to be an excuse, not necessarily to talk about the First Lady’s backside, but to riff on booty in general, but… in doing so, Howie missed an opportunity to learn something that’s obviously outside his own experience. He’s a good guy,I think, and so when he hears Baby Got Back, or Rumpshaker, they’re just raucous celebrations of beauty, and when he hears pigs like Grisham or Rush Limbaugh bagging on Michelle Obama’s appearance, he just hears people being mean. Krissah Thompson was trying to explain to him that the former are cultural attempts to counter, and the latter are attempts to further, stuff like this:

The focus on this first lady’s posterior has historical antecedents. It reaches back to the imagery of Hottentot Venus, a woman from what is now South Africa whose naked body and pronounced posterior were paraded in shows throughout 19th-century Europe. On to the selling and trading of black women’s bodies through slavery. In modern times, black women’s figures continue to be up for public discussion in ways that are celebratory (see: “Brick House” by The Commodores) and insulting (see above).

Her presence as first lady challenges the historic view of a black woman’s place and notions of beauty, says Michaela Angela Davis, a fashion expert who has campaigned for more positive images of black women in the media. “Michelle is black from a distance. She’s a real black girl,” Davis says. “A lot of people have tried to make diversity into this weird beige thing. Her presence is just really powerful to interject into the global consciousness.”

The first lady’s critics “are reacting to the culture in which they’ve grown up or they are using it as a code to racialize Michelle Obama and remind people that she’s black,” says Andra Gillespie, an associate professor of political science at Emory University. “It is unreasonable to expect a nearly 50-year-old woman to have the body of a 25-year-old. She looks great for her age.”

As Thompson notes elsewhere in her piece, other first ladies have endured judgments about their physical appearance, but this is different. Reducing powerful women to their physical attributes is a way of trying to put them “in their place,” but this particular focus on Michelle Obama is an attempt to put her in a very specific place.

The First Lady is a beautiful, accomplished woman who is a role model to women and girls everywhere, despite what her relentless attackers say, and this kind of judgment falls on them, too. Even if you’re not a fan of Michelle Obama, your own daughters, sisters, and mothers are listening. Think about what you’re saying, and what they are hearing.

*This post has been updated to reflect that Howard Kurtz is now at The Daily Beast, and is no longer with The Washington Post.