Why Are People So Shocked Pence’s Photo With the GOP Is So, So White?
Opinion

Why Are People So Shocked Pence’s Photo With the GOP Is So, So White?

In 2012, non-Hispanic whites accounted for 89% of Republican self-identifiers nationwide, according to a Gallup poll. Just 2% of Republicans are black. “The Senate’s Only Black Republican Talks Racism on Senate Floor” was the title of an actual article on NBC News this past July. There are not a lot of black Republicans in general, but on Capitol Hill they are very nearly a myth.

We all know that. We know that there are a lot of reasons that people of color have avoided the GOP for a very long time. Remember the reactions to Donald Trump‘s black outreach earlier this year? His “What the hell do you have to lose?” appeal wasn’t really applauded as being enticing.

Still, when Vice President-elect Mike Pence posted a photo with the congressional GOP in D.C. today…

Great having @mike_pence visit today! I’m excited to work with him and @realDonaldTrump to shake up the status quo in Washington, D.C. #MAGA pic.twitter.com/2xQIGs2a9Z

…people were still shocked to see the overwhelming whiteness staring them in the face. 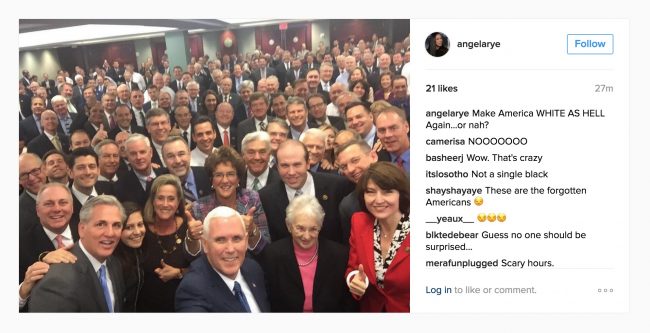 @cathymcmorris @RepGrothman @mike_pence @realDonaldTrump Quite a diverse crowd you have there

@cathymcmorris @carlquintanilla @mike_pence @realDonaldTrump Did anybody look at this picture before posting it, and maybe think twice?

@cathymcmorris good thing nothing says ‘no more status quo’ in politics like a group of older white men.

Race had nothing to do with the election, as this photo makes clear. pic.twitter.com/O6e9UE4e6a

BUT WHEN HE DOES, HE PREFERS A LARGE ROOM OF WHITE PEOPLE pic.twitter.com/GLMBBotlAW

The criticisms are reminiscent of the ones leveled at Paul Ryan when he took a similar selfie with his interns in D.C. They’re also similar to what the Huffington Post faced when they tried to show off how many (white) women they had in high positions.

The question here is not “Will they ever learn?” It is not “Why don’t people of color want to be associated with the GOP?” It is really just “Why do Pence & Co. want to show this off?”

Answer that question at your own risk.