Why Did Trump’s Campaign Manager Tweet Out an Op-Ed Attacking Donald Trump?
Opinion

Why Did Trump’s Campaign Manager Tweet Out an Op-Ed Attacking Donald Trump? 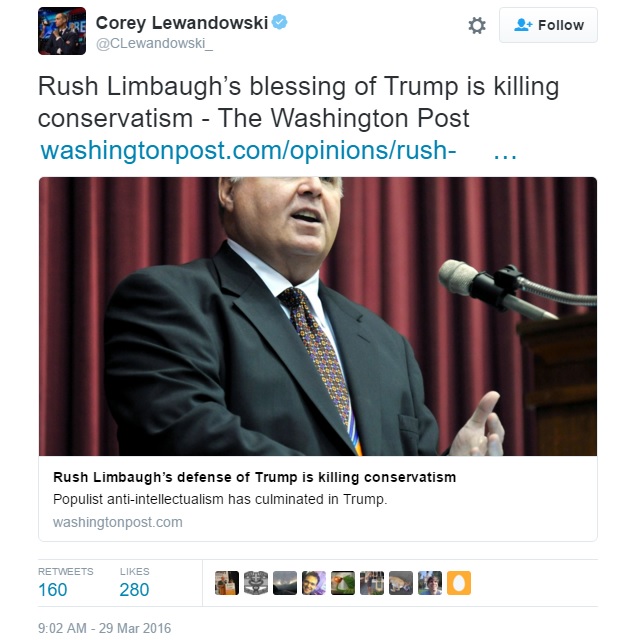 As you can likely tell from the headline, the op-ed from conservative Post columnist Michael Gerson is very, very critical of Trump.

Many Republicans, in Washington and elsewhere, do not view civility, inclusion and tolerance as forms of weakness or compromise. In fact, they view casual misogyny, racial stereotyping and religious bigotry as moral failings, in their children and in their leaders. And they oppose — as a matter of faith or philosophy — any form of populism that has exclusion, cruelty or dehumanization at its core.

In reading Trump’s recent interview with The Post’s editorial board, what is striking is not only his shallowness (though his policy depth must be measured in microns). It is also his utter rootlessness. None of his ideas or proposals is placed in the context of ideals or ideology, Republican or otherwise. Trump possesses impulses and instincts. He does not reason from first principles. Whatever the appeal of his authoritarian populism, it does not remotely resemble conservatism.

So why on earth is Trump’s campaign manager tweeting out a piece attacking Donald Trump? I have some theories.

I consider all possibilities equally likely.