Why Dr. Ben Carson Shouldn’t Have To Apologize For His ‘Bestiality’ Remark 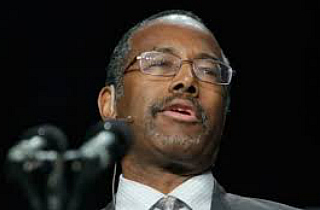 On Tuesday’s Hannity show, when asked for his thoughts on gay marriage, Dr. Ben Carson stated that marriage “is between a man and a woman” and that “no group — be they gays, be they NAMBLA, be they people who believe in bestiality, it doesn’t matter what they are — they don’t get to change the definition. It’s not something that is against gays, it’s against anybody who wants to come along and change the fundamental definitions of pillars of society. It has significant ramifications.”

The predictable “Dr. Ben Carson equates homosexuality with bestiality!” outrage ensued, so much so that today Dr. Carson was forced, on MSNBC’s Andrea Mitchell Reports, to explain:

And, you know, I think, you know, in terms of what was said on Sean Hannity’s show, that was taken completely out of context and completely misunderstood in terms of what I was trying to say. You know, as a Christian, you know, I have a duty to love all people and that includes people who have other sexual orientations, and I certainly do, and never had any intention of offending anyone. What I was basically saying, and if anybody was offended, I apologize to you. But what I was basically saying is that there is no group. I wasn’t equating those things. I don’t think they’re equal. Just, you know, if you ask me for apple and I give you an orange you would say, well that’s not an orange. And then I say, that’s a banana, that’s not an apple either. And there’s a peach, that’s not an apple, either. But it doesn’t mean that I’m equating the banana and the orange and the peach. And in the same way I’m not equating those things.

But Dr. Carson should not have to explain what is simply an obvious argument illustration, much less apologize to those offended (i.e., to those lacking listening and reading comprehension skills).

While I am a conservative who supports same-sex marriage, I fully appreciate the “slippery slope” public-policy argument made by opponents who worry that redefining marriage could lead to recognition of any other number of unions – including unsavory ones. Though I do not personally envision this being the case down the road, it is certainly a valid point and one worth considering.

When making this argument (as Dr. Carson did), polygamy, or marriage to minors, or, yes, even bestiality (and marriage to one’s pets?) are often invoked as possible ‘future products of marriage’s re-definition.’ In no way, however, does it mean the individual (in this case, Dr. Carson) is equating same-sex marriage or homosexuality with any of the examples posited.

Rick Santorum was also a victim, like Dr. Carson, of this false outrage. For several years, the Left ran with a terrible (and possibly deliberate) misinterpretation of Santorum. In early 2012, when Santorum’s presidential run was soaring, particularly following the Iowa caucus, cries of “Santorum describes homosexual relations as ‘man on dog’!” or “Santorum says gay marriage could lead to bestiality!” were everywhere online (see, e.g., here). But, as it turns out, Santorum had said no such thing. The crude, inaccurate allegation stemmed from a 2003 Associated Press interview in which Santorum said this about gay marriage:

Every society in the history of man has upheld the institution of marriage as a bond between a man and a woman. Why? Because society is based on one thing: that society is based on the future of the society. And that’s what? Children. Monogamous relationships. In every society, the definition of marriage has not ever to my knowledge included homosexuality. That’s not to pick on homosexuality. It’s not, you know, man on child, man on dog, or whatever the case may be. It is one thing. And when you destroy that you have a dramatic impact on the quality—
[At that point, Santorum was interrupted by the interviewer who joked that he/she was not expecting to hear a U.S. Senator use the term “man on dog.”]

Basic reading comprehension and common sense did not, however, prevent the unfair smears that haunted Santorum for years.

Dr. Carson’s “slippery slope” argument will naturally be made again by traditional marriage supporters. Misquoting and misrepresenting anyone on this issue – be it Dr. Carson, Rick Santorum, anyone – is fueled by either the willfully obtuse or the agents of dishonest hackery.

So to Dr. Carson, I say: no need to issue an apology. In fact, you’re owed one.