Why Is MSNBC Stonewalling on Hosts’ Tax Issues?

Why Is MSNBC Stonewalling on Hosts’ Tax Issues? 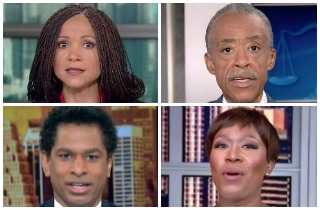 It’s been a while now since reports about the millions MSNBC host Al Sharpton owes in taxes, and just a few days ago, reports revealed that another MSNBC host, Melissa Harris-Perry, also owes a lot of money to the IRS.

But that’s not all, according to a new report from National Review. Touré, one of the hosts of The Cycle, reportedly owes over $59,000 in taxes, while thegrio.com Mgr. Editor and former host Joy Reid reportedly owes roughly $5000.

MSNBC did not respond to National Review (though they note reps for the above two hosts said they’re currently resolving their tax issues), but Washington Post media reporter Erik Wemple tried to get comment from the cable network too. He didn’t receive one and wasn’t happy about it:

In the collective ethic of MSNBC, there can be no excuse for tax delinquency.

And there’s even less of an excuse for MSNBC’s non-response to all this news. National Review fetched no response from the network. When the Erik Wemple Blog knocked today, the network again clammed up. A spokeswoman offered to go off-record with an explanation of things. We responded that we weren’t interested in spin that we couldn’t publish. Is it that hard for MSNBC to take a simple stand in favor of our common civic obligations?

For the record, Mediaite also reached out to MSNBC and similarly received no comment.