Why Jeff Bezos Won’t Fire Richard Cohen, Even Though He Really Should 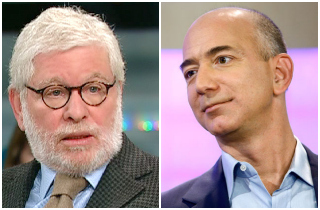 It’s time to get rid of Richard Cohen. The question is: will Jeff Bezos do it?

At this point, taking down Cohen columns is batting practice. Cohen last came to our attention when he argued that white people had every right to be afraid of African American teenagers because “hoodies,” and that any actions taken toward black males based on sweatshirt-based fear was part of the drag of our scary society. Cohen clearly writes from the perspective of a older white male terrified by anybody unlike him. His reactions may or may not be personally legitimate—YMMV on justified rape and murder, I guess*—but they’re 100% intellectually invalid as arguments on a major op-ed page. The foundational theses of both Cohen’s columns simply make no sense.

Which leads to the far more interesting question of why Richard Cohen continues to have a Washington Post column at all. Any young writer turning in posts with the utter luck of coherence as those routinely trotted out by Cohen wouldn’t be allowed near a respectable publication; the Washington Post has certainly cut up-and-comers for exponentially less. Cohen, on the hand, appears to be inexplicably tenured. The equally perplexing prevalence of NYT’s op-edsters Tom Friedman or David Brooks, who can get away with nonsensical columns and maintain cushy gigs, further demonstrates how power perpetuates itself in a media world still ruled by white men.**

A second piece in today’s Post portends poorly for the paper’s new owner breaking this dynamic. Bezos was meta-interviewed by the publication he just bought about his plans once he takes over. Short version: he doesn’t have any. Bezos claims his WaPo will place “readers at its centerpiece,” but he says little to back that up (and in fact keeps referring to the paper as a product), instead speaking gauzily about the problems facing the industry, and using words like “innovation” as if they’re magic dust. You hardly need to read between the lines to tell that Bezos has no idea what he’s doing and intends to freestyle it once he’s in Washington.

In other words, Bezos is going to run the Washington Post in a similar vein to how Cohen writers columns: by messing up a lot. “I’m a genetic optimist,” Bezos explained to his interviewer. “I’ve been told, ‘Jeff, you’re fooling yourself; the problem is unsolvable.’ But I don’t think so. It just takes a lot of time, patience and experimentation.” This is part and parcel with the current version of the Great Man Theory, in which men, almost always white, pile mistake upon mistake until getting the idea that saves the company/world, all of which is due to the persistence of their beliefs in themselves.

This trial-by-error approach to success sounds super—if it were extended to people other than white men. But in Cohen’s world, women and black men don’t get to make mistakes. If they dress wrong, they get shot or raped, and when it happens it’s at least partially their fault. The luxury of erring—be it a business strategy that doesn’t work or a column that fails to cohere—isn’t extended to them, to say nothing of the fact that the definition of “error” in this case is crossing arbitrary lines decided by men immured from their consequences. For those who don’t act how Richard Cohen wants them to, the punishments are permanent.

It’s time there were consequences for Richard Cohen, too. But it’s doubtful Jeff Bezos will bring them. When he reads Cohen’s columns—if he reads them at all—he’ll probably just see the necessary missteps of an innovating man. And in a few weeks or so, we’ll all be back wondering how Cohen got away with his next column.

* For the purposes of this piece, you don’t even have to consider that Cohen himself has been accused of sexual harassment—though you’re more than welcome to.

** Ta-Nehisi Coates has written sharply on this point, but I can’t find a link. Send it to me if you have it.