Why The 2012 Presidential Election Hinges on ‘Working Class’ Whites

Why The 2012 Presidential Election Hinges on ‘Working Class’ Whites 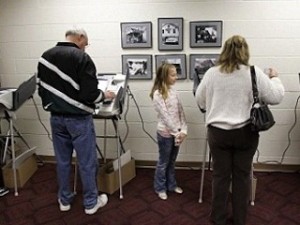 Reading the news lately one would think that the 2012 presidential election will be determined by a Black electorate that is either brainwashed, according to Mr. Herman Cain, and at the ready to vote for President Obama, or a Latino electorate that has, for instance, increased upwards of “60 percent in Indiana and Ohio,” two crucial states to nearly any path to victory.

While both of these electorates are indeed important — especially to Democrats who typically are the beneficiaries of large turnouts in both — putting sole attention on either belies another important group: Swing voters.

Who are they? What is their impact?
Research by the Democratic Leadership Council over 5 presidential elections and the 2006 midterm election, shows that roughly two-thirds are white, high school-educated, reside in a small town or suburb, are empty nesters, not weekly churchgoers, and are pro-life. This isn’t a profile of a voter who is typically kind to Democrats. In fact, whether Democrats have won or lost elections, they’ve pretty consistently lost this vote. The only difference being in by how much: in losing elections Democrats fared 20 percent worse than in winning ones.

Looking forward to 2012 Democrats should be prepared, as usual, to lose this vote, but certainly not by a margin approaching 20 percent. Yet that’s exactly what it looks like they should be prepared for. According to the Pew Research Center, support from high school educated whites has waned for Democrats by 15 percent and increased for Republicans by 4 percent. That represents a 19 point swing and if it stays constant, or worse keeps trending in that direction, Democrats are in a frightful position. A 5 percent loss in swing voters is bearable, but a 25 percent loss — which at this point is in the realm of possibility — equals certain defeat. 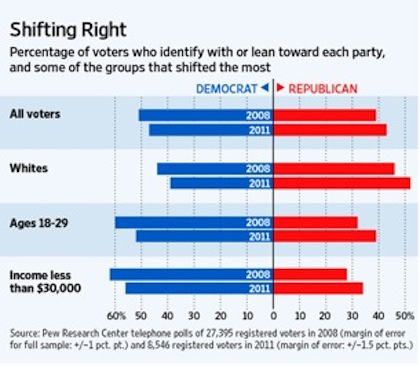 Times Change, People Don’t
Interestingly enough, the tell-tale story of American politics over the past 30 years isn’t how much it’s changed, it’s how much it has stayed the same. It makes political messaging even more crucial, not less so. Such messaging has to be able to not only assuage independent and first-time voters of their concerns and issues without demonizing the other side (we have long known that antagonizing the other party turns independent voters off), it also has to be able to demonstratively communicate to one’s base that their voices are being heard and their issues are being addressed. It’s what one could call the “Passion Paradox.” Too much of it can be dogmatic and not inviting enough for independent voters; while too little of it won’t have the necessary je ne sais quoi that draws in the base and balloons the turnout.

Watch the GOP Message
The GOP knows they will win the working class white vote but they also know that to win it big, at least big enough to cause Democrats serious problems, they have to earn it. To that end, one could argue that they are deploying a number of tactics to assist in this process.

(1) Paint Democrats as Weak on Defense
This is an oldie but goodie. Typically, trumpeting out national security credentials while showing Democrats as weak and ineffectual helps with the working class white vote. John Kerry will forever be an example due to the Swift Boat campaign that he was too slow to react to. But in the midst of Pres. Obama not only killing Osam bin Laden but also ramping up the war in Afghanistan, extending the service of Secretary of Defense Robert Gates, a Bush appointee, refusing to close Guatanamo Bay, and assassinating an American citizen (Anwar al-Awlaki) allegedly engaged in terrorism, there is little to point to when attempting to paint Democrats as weak on terror or national defense. But that doesn’t mean the GOP won’t try. And it leaves them with one thing: the repeal of don’t ask don’t tell. Look for that to have a renewed emphasis with a “scary” message similar to this one: the only way to defeat the world’s best military is to rip it apart from the inside out, and that’s what this social experiment does.

(2) Shrink the Democratic Voter Rolls
The second way is voter suppression in the form of a number of new state laws that are making it harder for core Democratic groups to vote, including college students, the elderly, minorities and even the disabled. Recently I interviewed the executive director of The Lawyers’ Committee, a nonpartisan, nonprofit that has produced a ‘Map of Shame’ detailing which states’ laws are the most discriminatory. For instance, in Florida if you move from one county to the next you may no longer be eligible to vote. So just because you may have the same zip code, that doesn’t mean you still have the right to vote. Don’t be presumptuous, apparently, is the message.

(3) Immigration, Immigration, Immigration
While it doesn’t seem like a hot-button issue now, that is sure to change as we get closer to the election. Pres. Obama, arguably, hasn’t done much for Latino voters to rave about but that’s not what the GOP will be communicating. Instead, they’ll hammer home that there aren’t troops, a fence, or a strategy in place to shutdown illegal immigration. Herman Cain’s recent ‘electric fence’ idea in response to how to stem the tide of border-crossers is just the tip of the iceberg. And just to be safe they are also keeping the ‘Fast and Furious’ debacle on lukewarm so it’s ready to serve just in time. International black market gun sales have little to do with immigration but that won’t be the perception. Instead, it’ll be sold as Mexican violence spewing across the border because Pres. Obama doesn’t have the cojones to stand up to the Mexican government, and his Department of Justice is inept.

John Wilson is a health policy analyst in Maryland, and also a staff writer for The Loop 21. He frequently writes about health policy, education policy, and politics. You may reach him at john@policydiary.com.