Why The Health Care Decision May Be Less Dramatic Than Expected 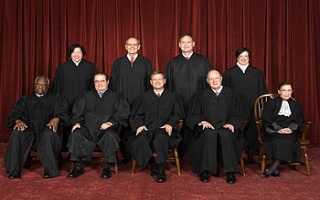 The short-term political impact of the upcoming health-care decision is undeniable, but big-picture impact of the ruling is being hyped up to epic proportions. Though it’s possible the Supreme Court may choose to throw the law away entirely, or to use the individual mandate to radically reframe the commerce clause, it doesn’t often make sweeping rulings that fundamentally alter how law in the United States works. The historical evidence actually suggests that a momentous, ideological declaration on health care could be a media-driven fantasy. While whatever the Court decides will clearly be consequential, the earthshaking outcome all are expecting is far from guaranteed.

Before analyzing what the likeliest scenario will be tomorrow morning, let’s consider the most dramatic potential outcomes: If the law is struck down, partially or in full, liberals will claim that a court full of self-proclaimed ‘originalists’ are actually activists hell bent on destroying the modern interpretation of the commerce clause and the 20th century economic history that stemmed from it. Conservatives will praise the majority as principled originalists who brought America back from the brink of its flirtation with socialism. On the other hand, if the law is upheld in full or somehow the mandate is left untouched, liberals will exhale, loudly. Conservatives will loudly and vividly protest, and argue that the limits on federal power have totally eroded and that the Marxist soirée envisioned by President Barack Obama is now upon us.

But these Manichean distinctions can’t all be right. There is surely more nuanced legal and behavioral precedent for whatever the court decides on such a complex issue, one would hope. Historical examples reveal where the political literati are right to peg this as a game-changer and where they are blending the short-term memory of political day-to-day with the long-term memory of policy into oversimplified predictions.

Brad De Long highlights five critical moments in which popular conception of major legal precedent was radically shaped or re-shaped by a Supreme Court decision. These are Marbury v. Madison (establishing the concept of judicial review), Lochner vs. New York (endorsing liberty over contracts), West Coast Hotel Co v. Parrish and subsequent 1937 decisions that ended the Lochner era, and the actions of the Warren Court to criminalize racial discrimination in schools and law enforcement with Brown v. Board of Educaiton and Miranda v. Arizona, among among other areas.

A glance at the news this week suggests that the Court’s ruling on the ACA is one of these critical moments. The justices could dramatically scale back the commerce clause or endorse a far more expansive understanding of it. Either deeply ideological decision would break the stalemate over the accepted role of government decidedly in the winning side’s favor. Since 1937, the justices have consistently endorsed a broad interpretation of the commerce clause that allows Congress to meddle significantly in economic life. Both a dramatic re-imagining or bolstering of that legal provision would have major consequences for future congresses, presidents and courts.

I don’t see that dramatic recalibration happening in the way the media has envisioned it this week. I hold out hope that the justices recognize the magnitude of what is in front of them and will reach a far more nuanced opinion than what’s been presented in simple flow-charts on blogs and in newspapers. They might bite their tongues and avoid an overly sweeping ruling, or they might actually want to hand down a narrower one. But the possibility that the conservative wing is ready to radically shift (hell, blow up) decades of legal and cultural precedent should be astounding, not the odds-on favorite to occur.

Why? Because a major element of the Court’s DNA has always recognized the need to thoughtfully protect its long-term legitimacy. In addition to precedent, public opinion and the justice’s own beliefs undeniably influence how they choose to protect it. At a 2011 talk at University of Chicago, Justice Sonia Sotomayor claimed that “On the vast majority of cases, I bet we’re right with” the public. On an issue as consequential and popularly followed as health care, it follows that the justices would want to be at least broadly with the public.

But a recent Pew Research study suggests that no one is going to be truly pleased with any simple decision SCOTUS reaches. 44 percent say that they will be happy if the whole law is just thrown out. 40 percent say they will be pleased if the individual mandate is tossed. 39 percent said they would be happy if the whole law was upheld. In short: there is no public consensus on one of the flow-chart options.. These numbers project the court should avoid a clear and dramatic decision and instead try to thread the needle. They indicate that it is still possible that the Court will try to strike the law or the mandate with an eye out for “contemporary imponderables”, the specifics of this situation, once referenced by Justice Robert Jackson.

Plenty of historical precedent exists to show the more triangulating, forward thinking side of the Supreme Court. Youngstown Sheet and Tube Co. v Sawyer is a prime example of the court’s ability to hand down a clear, consequential judgement on a contemporary issue that is restrained by concurrences and other qualifications. Justice Jackson’s concurrence agreed that President Harry Truman had acted unconstitutionally, but established clear pathways for related exercises of executive power down the road under different circumstances. Recent affirmative action cases Grutter v. Bollinger and Gratz v. Bollinger show a similar attempt to navigate complex modern issues without dictating pure ideology from the bench.

If it must find the law unconstitutional, hopefully the Court takes the path of least resistance and trims the law via legal justifications that happen not to fit within a Twitter post,. A decision like this would likely be less concisely impacting than Marbury, Lochner etc. But nonetheless it remains the most likely result– the Court will take apart elements of the law, it may even strike the mandate, but it will do so in a way that checks or fails to achieve a radically conservative dismantling of the commerce clause generally.

NEXT PAGE: The Likeliest Court Result