Wire Creator David Simon Obliterates Romney Over 13% Taxes: ‘This Republic Is Just About Over, Isn’t It?’

Wire Creator David Simon Obliterates Romney Over 13% Taxes: ‘This Republic Is Just About Over, Isn’t It?’ 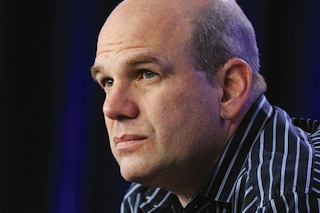 It really shouldn’t be surprising that the creator of one of the most socially-conscious television shows of the past few decades isn’t a fan of Mitt Romney. And it definitely shouldn’t be surprising that he wouldn’t be a fan of Romney proudly proclaiming that he never paid taxes lower than 13% as if that’s an appropriate minimum. One thing that may actually be surprising is that, unlike his time on The Wire, David Simon didn’t take his time to get his message heard, building up the details and layers slowly and delicately.

No, he was able to tear Mitt Romney apart in just a few short, bitterly sarcastic paragraphs.

The celebrated television writer and former journalist wrote his comments in a post on his personal blog entitled “Mitt Romney paid taxes at a rate of at least 13 percent. And he’s proud to say so.” In it, he responds to Romney’s comments in front of reporters today in which the candidate claimed he never paid less than 13% on taxes and described anyone who wanted to, y’know, actually see those tax returns as being “small-minded” in their “fascination.”

Here’s what Simon had to say to that:

“Am I supposed to congratulate this man? Thank him for his good citizenship? Compliment him for being clever enough to arm himself with enough tax lawyers so that he could legally minimize his obligations?

Thirteen percent. The last time I paid taxes at that rate, I believe I might still have been in college. If not, it was my first couple years as a newspaper reporter. Since then, the paychecks have been just fine, thanks, and I don’t see any reason not to pay at the rate appropriate to my earnings, given that I’m writing the check to the same government that provided the economic environment that allowed for such incomes.

I can’t get over the absurdity of this moment, honestly: Hey, I never paid less than thirteen percent. I swear. And no, you can’t examine my tax returns in any more detail. But I promise you all, my fellow American citizens, I never once slipped to single digits. I’m just not that kind of guy.

What else is there to say to that? Nothing, really. He’s pretty much said it all. So, instead, I’ll just point out there’s a trailer for the new season of Treme out. It looks good.