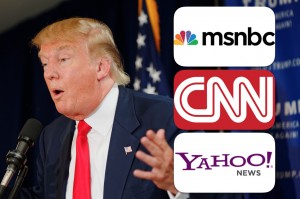 In my review of the “Republican” (Trump) convention I wrote that I was surprised that most of the news media had been more respectful to Donald Trump than I had expected. I had anticipated the convention being the moment when they finally gave Trump the “Full Palin” treatment and demolished his chances of winning by disqualifying him from the office in the minds of a strong majority of voters. I even thought that, while Hillary would still win, the media allowing Trump to be perceived as a plausible president might allow him to keep the race close to the very end.

Since then, almost everything has changed.

While the coverage of Trump’s convention may have been deferential (“his kids are so great!”), the news media, at least once prime-time began, was over-the-top reverential in their treatment of the Democratic gathering in Philadelphia. This phenomenon then got turbo-charged when Trump was baited into responding disrespectfully to the Khans, the Muslim “Gold Star” family who have dominated the news cycle ever since.

There have been few conservatives who have been more critical of Trump since the start of this insane campaign than me, and he deserves every bit of condemnation he has gotten for needlessly mishandling the Khan situation. However, there is also no doubt that the media became obsessed with the story because they want Trump to lose, got a bit freaked out about his very temporary convention bounce, and smelled blood.

Hillary, while she is less likely to be stupid enough to so publicly take on the parents of a fallen war hero, would also never have been lured by the media into the conflict to the extent Trump was. If she had somehow stepped in it, the news media would have let it go far sooner than they did for Trump (for instance, how many voters are even aware of the controversy over her basically calling some family members of Benghazi victims liars?).

This story has seemed to open the floodgates now on Trump in much the same way that the infamous Katie Couric interview did with regards to Sarah Palin in 2008. Now, everything Trump says seems to be instant fodder for the media’s intensified “gaffe watch.”

This has even led to some clear overreaching by the media. For instance, Trump got grilled yesterday (this story was the lede at Yahoo for a while) for supposedly kicking a crying baby out of a speech. This was absurd. Any reasonable person who actually saw the tape of the episode could plainly see that he was obviously joking and that the whole thing was actually rather endearing.

However, when the Khan story has created the narrative that you are a royal jackass, then the media will see every other story about you through the prism of you being a royal jackass. Similarly, once Couric supposedly “proved” Palin was stupid, then everything that Palin said was automatically presumed to be dumb, even when it wasn’t (for instance the media later universally ripped Palin for tactfully telling a school kid that the vice president was “in charge” of the Senate, when, in fact, they are indeed the “president” of that body).

This is the kind of news media treatment I always expected/feared that Trump would get once the general election came around and why I have always been so sure that he would lose, even to an awful candidate like Hillary. The storm just came about a week later than I had guessed it would have.

This whole situation, while highly predictable given the media’s role in the last several presidential elections, is likely quite shocking to Trump himself. I have written extensively here about how the news media, especially the conservative variety, was largely in the tank for him during the primary season. This allowed him to control his own narrative and put out fires whenever needed, usually by simply making some sort of a scene in order to change the subject.

It is now very clear that the same media weapons which made him a wrecking machine in the primaries are either no longer available to him or are completely outgunned by much heavier artillery.

During the primaries Trump had his YUGE twitter account, the Drudge Report, Breitbart.com, The New York Post, most of Fox News Channel, and almost all of talk radio as effectively the mouthpiece of his campaign. In a race fought among a relatively small percentage of the population, this gave Trump the ability to effectively communicate, largely unfiltered, to a huge percentage of GOP primary voters who consume “conservative” media almost exclusively (all while his bloated field of opponents had almost no such access).

In the general election, now that he is fighting a Democrat rather beating up on Republican primary foes, Trump has totally lost CNN and MSNBC (as if even Stevie Wonder couldn’t see that happening!). Meanwhile, his battalion of conservative outlets suddenly looks rather tiny and completely ineffective as they do not remotely reach the type of persuadable “low-info” voters who determine poll swings and who win presidential elections.

So now, when Trump makes his near daily (hourly?) mistake, he doesn’t have the ability to reach a large portion of the electorate unfettered to clean it up or create a distraction, mostly because the voter base is MUCH MUCH larger now and, unlike primary voters, the vast majority of them are not watching cable news to begin with (for instance, his interview with O’Reilly last night will reach almost zero of the voters he would need to turn around to get back into this race).

A great example of how Trump tactics which worked like a charm in the primaries are being suddenly rendered powerless in the general came earlier this week. This was when a transparent attempt by the Trump campaign to create a diversion by clearly having The Post publish nude photos of Melania Trump on their front page for two straight days was almost entirely ignored by the major news media. Had this been the primaries, that scheme, as bizarre as it was, would have “worked.” But the rules of the game have now drastically changed against Trump’s strengths.

Trump, the master media manipulator, is now effectively at their mercy. He may still bring them the ratings they desperately crave, but they apparently still take their role of the ultimate gatekeeper of the presidency seriously enough (just not so seriously that they would prevent him from winning the GOP nomination, as they should have) to make sure they keep him out of the White House.

If only some conservative had seen this scenario coming and tried to warn Republicans that the media destruction of Trump was inevitable if he was nominated.

Sigh.
—
John Ziegler is a nationally-syndicated radio talk show host and documentary filmmaker. You can follow him on Twitter at @ZigManFreud or email him at johnz@mediaite.com