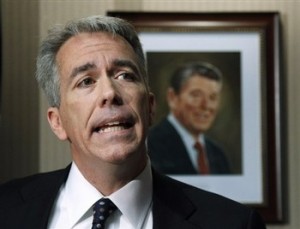 You know what we haven’t had in a while? A good old fashioned town hall moment. There haven’t really been that many since the health care town halls in 2009, but yesterday, Congressman Joe Walsh heard some interesting opinions from a constituent. A woman interrupted Walsh to complain about the “seditious behavior” of people in elected office, and said that Obama should be honest about his political philosophy. What is that philosophy? According to this woman, “socialism… communism, Nazism, whatever.”

Walsh was talking about his belief that he doesn’t think his political rivals are necessarily bad people, they’re just not honest about their political goals. The woman interrupted him to suggest that anyone who wants universal health care should go to Europe. She said that the U.S. has been slowly losing its freedom for years, which Walsh agreed with, but then the woman went on a long tirade about who’s destroying this country.

“We need to keep our freedom and we aren’t because of the seditious behavior of people who lie about who they are and get into all of our public offices, and then we can’t get them out in time before they do the damage and we have been sleeping… for a hundred years.

“It is sedition. I mean, they did it underground. If they are honest brokers and they believe in what they’re saying and where they want this country to go, like Obama, then you’re right. He should have said it before he was elected, and said I’m a socialist, I believe in socialism, in communism, Nazism, whatever, and say this is where I want to lead the country, not do it underhandedly.”

Walsh didn’t challenge any of what she said, but did ask her that despite whatever label she would ascribe to the president, whether “we have a really good idea” of what his agenda is. She said that we do, adding that Obama is holding Americans “by the cojones.”

Watch video of the exchange below: