WSJ Editor Keeps Feud with ‘Huckster’ Hannity Going: Is He ‘Stupid or Dishonest’?

WSJ Editor Keeps Feud with ‘Huckster’ Hannity Going: Is He ‘Stupid or Dishonest’? 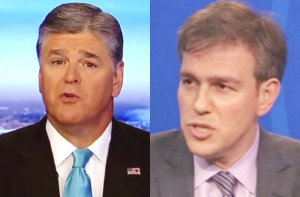 In the past few days, Fox News’ Sean Hannity has been harshly criticized by both CNN host Brian Stelter and Wall Street Journal editor Bret Stephens. He fought back against both, but the latter hit back in a pretty brutal column that basically went right to the core of Hannity’s love of Donald Trump.

Hannity, possibly because of all those polls showing Trump behind, has recently taken to saying that the Republican establishment and people like Stephens will be to blame if Trump loses. (And not, y’know, Trump himself or people like Hannity who have been unapologetic boosters of his candidacy.)

Stephens gets things started in his column tonight (titled “Sean Hannity’s Veneration of Ignorance”) by saying “Mr. Hannity has never made a secret of his feelings for Mr. Trump, which is the love that dares to speak its name.”

He likens him to a cult member, says he’s the kind of “political huckster” that puts Al Sharpton to shame, and even said that Hannity’s responses to him show “he can’t even swear competently.”

But Stephens also looks at the overall picture of what Hannity has been saying on his show for years: the Republican establishment did nothing to stop President Obama. Stephens rebuts that argument and says this:

[I]t’s hard to understand the constant lament about a do-nothing Congress except by wondering whether Mr. Hannity is stupid or dishonest.

Some anti-Trump conservatives have already started weighing in on Twitter, and New York Times columnist Ross Douthat supplemented Stephens’ column with this tweetstorm:

Remarkably, in this brutal takedown @StephensWSJ still gives @seanhannity too much credit: https://t.co/M6bDNWvmSK

That is, he suggests Hannity actually has an *ideological *commitment to Trumpism, and plans to fight for Trumpist ideas beyond November.

What he's embraced is just Trump — for the same reason he embraces *whatever* force seems most powerful in the GOP. Because he's a hack.

The only thru-line: Power worship and ratings chasing.

Which isn't to say Trumpism won't survive, even thrive. But it will need leaders who actually believe its tenets. Not just thugs and hacks.

And Sean Hannity? Tell me who has power, tell me who drives ratings, and I'll tell you where he stands. But just until the wind changes.