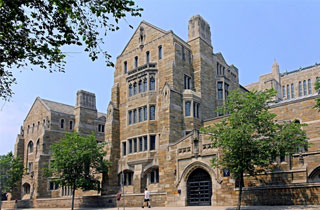 A group of Yale students interrupted and later protested a panel extolling the virtues of free speech.

The conservative William F. Buckley, Jr. Program held a free speech panel Friday featuring the Freedom for Individual Rights in Education’s Greg Luikianoff and National Review‘s Kevin Williamson. The purpose of the panel was the backlash and screaming protests on Yale’s campus after an associate master sent an email contesting the University’s stance on offensive Halloween costumes.

During the panel, a student began posting signs around the room reading “Stand with your sisters of color. Now, here. Always, everywhere.” When a security guard asked him to leave, the student refused. The incident was caught on camera.

Earlier in his remarks, Lukianoff mocked those who were hysterical about Associate Master Erika Christakis‘ email about Halloween costumes.  “Looking at the reaction to Erika Christakis’s email, you would have thought someone wiped out an entire Indian village,” he joked.

According to the Yale Daily News:

Around 5:45 p.m., as attendees began to leave the conference, students outside chanted the phrase “Genocide is not a joke” and held up written signs of the same words. . . . A large group of students eventually gathered outside of the building on High Street. According to Buckley fellows present during the conference, several attendees were spat on as they left. One Buckley fellow said he was spat on and called a racist. Another, who identifies as a minority himself, said he has been labeled a “traitor” by several.

Mitchell Rose Bear Don’t Walk ’16, a Native American student and one of the leaders of the protest, said she has spoken to the fellow who said he was spat on. She emphasized that spitting is “disgraceful” and not the message the protestors were looking to convey, but she confirmed that it did happen.