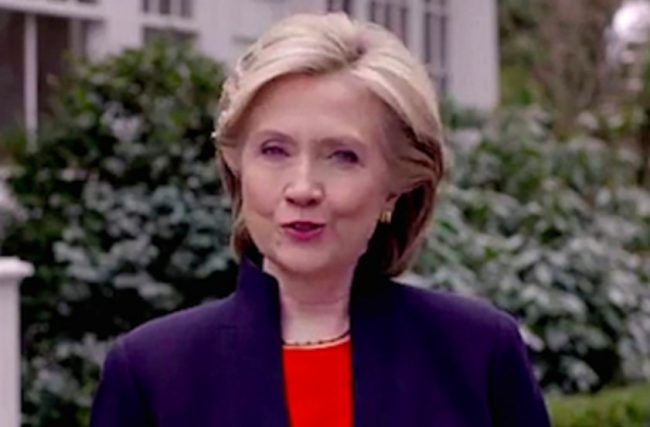 Nobody like a whiner. Especially one who is also an extremely privileged person who just let down tens of millions of people.

So it is no surprise that Hillary Clinton is getting roundly ridiculed for her efforts to promote her book “What Happened,” which is being referred to as a “Blame Tour,” and has even provoked #HillaryBlameGames to trend on Twitter. But just because she is whining while making excuses for losing the presidency in the biggest upset in modern history, doesn’t mean that what she is saying isn’t also, at least in large part, factually accurate.

To be clear, I loathe Hillary. My first documentary film, for the conservative group Citizens United, was a film intended to try to hurt her during the 2008 general election (which, unfortunately for the project, she never got to). She was a truly horrible candidate in nearly every way and deserves blame for losing to one who was, in many respects, even worse.

So, I am hardly in the business of defending Hillary Clinton. However, I do have this weird genetic compulsion to try to set the record straight about attacks I see as unfair, even when they are made against someone I don’t like and have no incentive to support. It seems to me that this is what is currently happening to her.

I have a somewhat unique perspective on this issue of whining vs. truth telling because it is the exact concern that I faced when I conducted the most extensive post-2008 election interview ever done with GOP vice-presidential candidate Sarah Palin. Palin, who (despite my falling out with her) I still believe was badly mistreated by the news media in that cycle, was extremely anxious about being perceived as a whiner. You see, back then she still wanted a political career, where whining was then (pre-Trump) seen as a major hindrance, as opposed to the one she eventually chose as a celebrity, where such behavior can be lucrative.

I have always believed in the concept that truth is a universal defense in nearly any situation and that whining is only really inappropriate if it is exaggerated, false, or trivial. For the most part, I think Hillary’s claims are actually fairly credible and legitimate.

Here I will address a few of her most prominent complaints about the raw deal she supposedly got in the 2016 campaign.

Sexism: This is by far Hillary’s weakest argument, though it might be her favorite. This is coming from a person who was elected as a senator from New York, a state to which she had no real ties, solely because she was the wife of a president who cheated on her. Being a woman is also a big part of the reason that she beat Bernie Sanders in the primary, and there is no evidence that more people voted against her specifically due to her gender than voted for her because of it.

Bernie Sanders: I can see where Hillary is coming from here, though you can argue it wasn’t the job of Sanders, who technically isn’t even a Democrat, to help her get elected. With that said, Sanders did set her up for the liberal base to find her totally uninspiring. This clearly hurt her turnout, especially in states like Michigan where Sanders did particularly well.

Russia: While we obviously still don’t know all the details, I am becoming more convinced that Hillary is correct that Russian influence may have made the difference here. WikiLeaks, a Russian front group, allowed the media to create the impression that both sides were equally corrupt, while underground Russian “fake news” efforts on Facebook and Twitter eroded her soft support and helped push late deciders to Trump.

Comey: I do believe that if James Comey had not sent that infamous letter to Congress just before the election that Hillary would be president today. Her polling collapse right after that event makes it rather obvious. Even worse for her might have been Comey’s second letter which had very little impact in erasing the first one, but which might have led to overconfidence by some of her voters who failed to show up on election day.

Campaign Tactics: I believe that the entire strategy of essentially going after Trump as being too politically incorrect was dramatically fatally flawed from the very beginning. However, the criticisms of her, for instance, not visiting Wisconsin, are simply unfair 20/20 hindsight. Look at the closing polls in Wisconsin. There was no logical way Trump could win there (where he was trounced in the primary). She would have been mocked had she spent valuable time there at the end of the campaign. It was a sound decision which simply didn’t work out for her.

Media: Her attack on the news media is the most complicated of her election gripes. There is no doubt that most of the press wanted her to win. However, they also were addicted to the ratings that Trump was bringing them and they didn’t want to kill off their golden goose too quickly. They were so sure that Trump couldn’t possibly pull it out that they allowed the race to remain close because it was good for them. Then, at the end, when the Comey letter came, they simply got greedy and miscalculated. To this day, as much as the mainstream media appears to hate Trump (much more than they showed during the campaign), I am still convinced that, like a drug user who knows they need to quit but can’t, they will be privately very upset when Trump eventually leaves office.

There is one more point I would like to make about how my conservative friends are reacting to Hillary’s book. This morning I awoke to see some of my favorite conservatives on Twitter mocking her for supposedly having gotten the message of George Orwell’s iconic 1984 book upside-down. When I read what she actually wrote I was stunned at how grossly inaccurately some seemingly smart people were interpreting what she had written.

It was VERY obvious to me that she was referring to the goals of the bad guys IN the book, and not to the intended message of the book itself. When even my favorite conservative writer, Allahpundit at Hot Air, blindly jumped on this fraudulent bandwagon (despite my warnings that he was dead wrong), it became clear to me that Hillary Derangement Syndrome is alive and well. It also further explained how Trump ended up winning.