You Know That Internet Phenomenon ‘Planking’? Seems That Tom Green Invented It In 1994 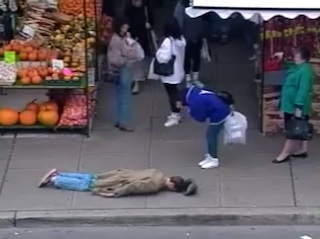 In case you aren’t hip on wacky Internet trends (Don’t feel bad if you aren’t. Seriously), the big one of this year is “planking.” Consider it the “Bros Icing Bros” of Summer ’11. What is planking? Well, it’s the fine art of lying straight down like a plank of wood to surprise and amuse people (this great Geekosystem post will help illustrate). Sounds fun/stupid, right? Well, turns out that this “new” practice was invented all the way back in 1994 by the king of fun/stupid, Tom Green!

Green, of course, is the comedian whose classic MTV show was a huge hit in the 90s and helped lead the way for shows like Jackass. (Like basically everything in this post, you have to be of a certain age and disposition to recognize the importance of that. However if you don’t understand how great this guy is, remember that he was the one who once tricked the world into thinking he was dating Monica Lewinski only to instead reveal a new handbag line). Last night he sent out this Tweet.

I know what you’re thinking; How can someone “invent” lying down flat? And to that I say…well…good point. However, the video that he eventually posted, taken from his Canadian public access show which was the precursor to his MTV stint, definitely seems to hold planking’s DNA. In it, Green lies face down and unmoving in a busy Ottawa street as a crowd amasses. After a few minutes, as the confused passers by try to figure out what to do, he merely gets up and walks away. Green explained its history to CNN here:

“‘That bit never aired on MTV,’ Green said. ‘It is a very obscure piece of video.’ In fact, Green contacted Rogers Cable, the Canadian company that hosted his early non-paid show, to dig up the clip.

‘The point of that video, we did a random, ridiculous thing and made a social comment with it,’ Green said. ‘Will people stop and help you on the street?’

A hidden camera captured the reaction of people on an Ottawa sidewalk eventually crowding around the motionless Green. He finally stood up and walked away after someone suggested calling an ambulance.

Green realized the ‘experimental’ bit had great comedic value because ‘people were really, really laughing hard in the studio audience,’ he said.”

So, is Green the true Father of Planking, contradicting media reports that the trend comes out of Australia?

Oh, does it matter? Whatever the case, it gives us an excuse to post this video: