Yumblr? What Some Of Tumblr’s Best Bloggers Think About Yahoo’s $1.1 Billion Purchase

Yumblr? What Some Of Tumblr’s Best Bloggers Think About Yahoo’s $1.1 Billion Purchase 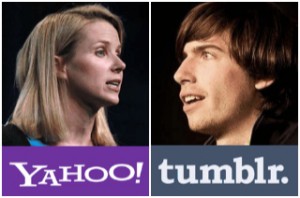 When news first broke that Yahoo was purchasing the blogging platform-slash-social media site Tumblr for $1.1 billion, my first reaction was not quite as enthusiastic as the victorious f-bomb founder David Karp dropped in his official announcement. See, I’m a bit of a Tumblr evangelist. I run Mediaite’s official Tumblr (which you should totally follow, by the way, if you don’t already), as well as my personal blog and a couple others on the side (Top 5 Funniest, GIFs From Last Night). And I just don’t want to see anything terrible happen to one of the internet’s most vibrant spaces.

The move was the latest attempt by new Yahoo CEO Marissa Mayer (or Marissa Mayr as she playfully dubbed herself today) to make the massive internet company hip again. Or is it destined to become the next Flickr, another hot web property with a missing “e” that Yahoo bought in 2005 and let die a slow and boring death while platforms like Instagram (possibly suffering a similar fate at the hands of Facebook) rose up in its place?

In Mayer’s official announcement on Yahoo’s Tumblr account, she offers a seemingly sincere “promise not to screw it up.” But will it be possible for Tumblr’s more than 100 million blogs/users to retain the freewheeling spirit that he made the platform explode with creative energy over these last few years?

I reached out to some of my favorite Tumblr bloggers today so see what they think about the sale and the potential it has to affect their use of the platform. Below are semi-condensed versions of their responses.

“I think Tumblr is a great platform that hasn’t figured out the best way to make a buck. I think with Yahoo buying them out, they may eventually make that buck with less trouble than with other options. My hope, though, is that they figure out a way to make it financially beneficial for creators as well as the company itself.

We’re nervous, but totally willing to see what happens next. However, this is a sensitive time for the community, and we need to be cognizant of how this affects our readers. I personally hope they stick around, though.

In the end, though, the thing that matters the most is the people. The reason I moved to Tumblr after running SFB independently for nearly two years is because it just felt like a place where I could engage people. And it’s gone further than that. I’ve made many friends here, and seen some of them reach the heights of success by simply being good at posting animated GIFs and clever jokes. That’s to be admired.”

“I don’t really know too much about Yahoo’s history so thus far I don’t think much of the purchase. I will likely continue to post here until the audience disappears or the service is no longer available. I suppose vast changes could impact my use of the site, but I highly doubt that it would. It doesn’t really matter to me who owns it, until it becomes a massive problem.”

“Well, I think more than anything I’m wary. While Yahoo! Doesn’t have the best track record for big acquisitions, it’s been so long since they’ve made one as high-profile as this one could argue they’re hardly the same company anymore. The problem that presents, though, is an unknown variable.

Ideally, they’ll step in to fix some of the more outstandingly glitchy things about the site while leaving the community alone. Practically, ads will be a part of that, too, but they were always going to be. That doesn’t concern me as much.

They need to be the “adult” at the party. Figure out how to pay for it, and tidy up for the guests, but then leave before undersides show up with the keg. A board might not like the idea of trusting the kids to not break the law, but the minute they step over that line they’ve lost the “cool” they were so desperately seeking.”

Bonnie Kristian, aka The Hipster Libertarian:

“I definitely find the news concerning. I mean, there’s a reason I haven’t visited Yahoo since about 2002: It’s incredibly busy and outdated. If Yahoo were a place instead of a website, I’d imagine it as a nursing home. If I get an email from a Yahoo email address, I assume (correctly, as a recent study showed) that they’re probably older and not very internet literate.

Tumblr, by contrast, is streamlined, user-friendly, and appealing to a young demographic. It doesn’t try to be all things to all people. If Yahoo tries — even a little bit — to remake Tumblr in its own image, I don’t see that as a potential improvement.

That said, I’m certainly not leaving Tumblr any time soon. The network is established enough that I think it could take quite a beating from Yahoo before people would abandon the followings and friendships they’ve worked to build. I just hope that beating doesn’t happen.”

“I’m in the minority, because I don’t think the sky is falling. Yahoo’s reported goal is to attract a younger demographic. So I doubt they’ll do what they’ve done in the past, like when they acquired Flickr and let it flounder. It would make no sense for them to repeat those mistakes.

I hope they will leave the platform alone for the most part. That seems to be the direction Yahoo is going, since they’re keeping Karp and the Tumblr team. In the press release, Yahoo said, “We promise not to screw it up.” Mayer is aware of the Tumblr community’s attitude, so I’m not too concerned right now.

I’ll stay if Yahoo basically leaves Tumblr alone, and the inevitable ads are not too intrusive. The beauty of Tumblr is in its simplicity. You don’t need to be a code nerd to set up a Tumblr. It doesn’t interfere with or impose itself in the user experience, which is why the Tumblr community has flourished. Still, it’s a service. Eventually you have to somehow pay for that service, otherwise it will disappear.

One good thing that I’m hopeful about is improved search functionality. Tumblr’s search is notoriously awful.

Tumblr is a place to find good content in more than 140 characters, engage with an intelligent community (if you follow the right people), and amplify your own voice.

Personally, I have a lot invested in Tumblr. I’m rooting for it to succeed. I got my prior job at The Daily and found the love of my life because of Tumblr. I’m just one example of many. To see this community disappear because of corporate interests would be tragic.”

While there is definitely a good deal of wariness in the Tumblr community, of the people I talked to, there is also a sense of hopefulness for the future and some degree of faith that Yahoo and Marissa Mayer will rise to the challenge and do the right thing by the users who made Tumblr what it is today. One thing Yahoo is unlikely to do is compensate bloggers in any major way any time soon — a sentiment appropriately addressed by Tumblr comedian Alex Blagg on Twitter immediately following the announcement: 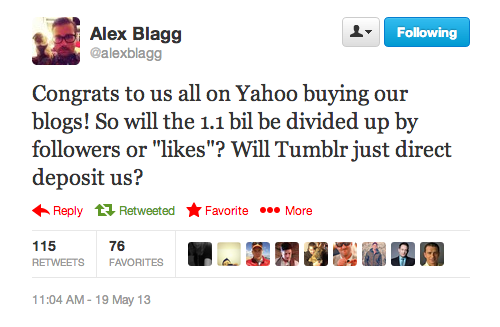