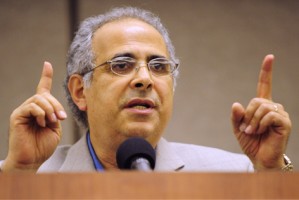 A five-alarm Twitstorm has erupted over a recent Zogby/O’Leary survey that contained the inflammatory question “Federal Communications Commission Chief Diversity Czar Mark Lloyd wants the FCC to force good white people in positions of power in the broadcast industry to step down to make room for more African-Americans and gays to fill those positions. Do you agree or disagree that this presents a threat to free speech?”

Media Matters linked to a FAIR blog post about it that got so much traffic, it overloaded the server for a time yesterday. Polling guru Nate Silver weighed in quickly, condemning the survey as “racially tinged.” He also points out, the question is based on a context-free statement that Lloyd made at a conference in 2005, and carries with it the suggestion of a “white purge” as policy.

The poll was commissioned by Brad O’Leary, publisher of the right-wing O’Leary Report, and author of the book “The Audacity of Deceit.” (Get it? Because Barack Obama had a book called “The Audacity of Hope?”) His website contains a raft of slanted polls.

While the poll was commissioned by O’Leary, Zogby does have its own standards for what it will or won’t do. Late last year, they refused to duplicate a poll commissioned by John Ziegler for his film, Media Malpractice.

I contacted Zogby International for comment on this story, and they said John Zogby was not available for comment. Their website lists quality controls for the interactive surveys, but makes no mention of editing for content. The company also declined to provide background information on this process.