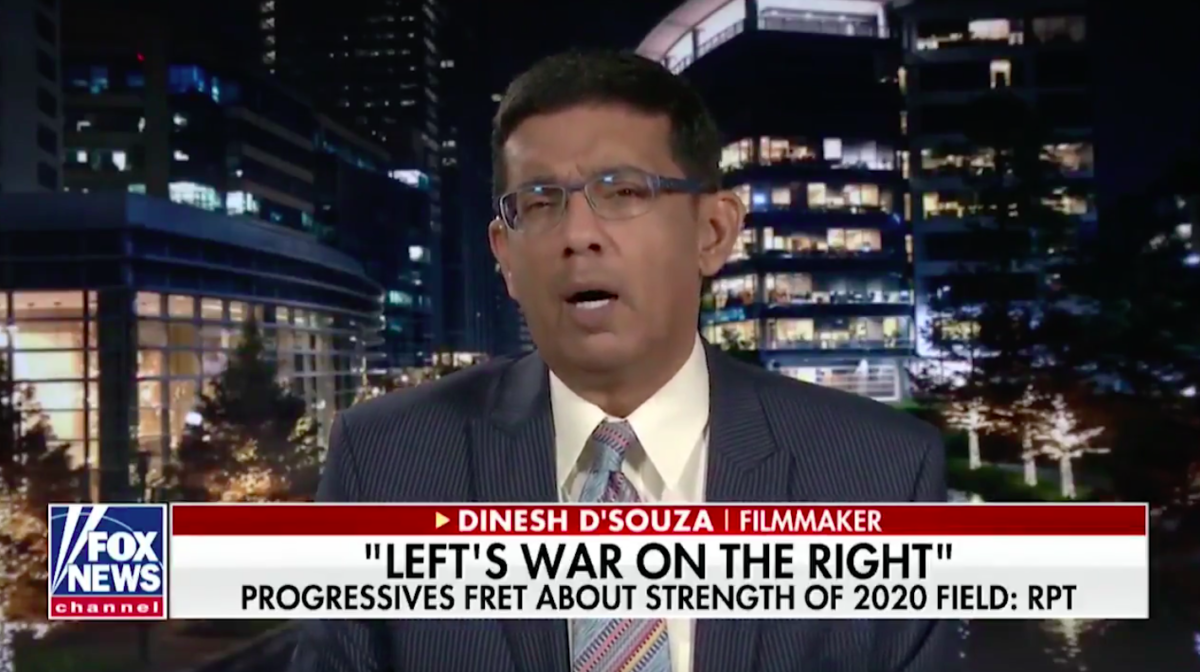 Fox News anchor Shannon Bream, who hosts Fox News @ Night — which the network identifies as a “hard news” program — invited well-known fabulist and conspiracy theorist Dinesh D’Souza on her show Friday to take part in a “discussion on immigration” and white supremacist violence.

D’Souza, a convicted felon who has a long history of spreading demonstrable falsehoods, spewing racist attacks, and allegedly beating his ex-wife, appeared on Bream’s show to discuss the El Paso, Texas mass shooting. His response to that racially-inspired attack was to change the subject; D’Souza instead highlighted the Dayton, Ohio shooting and claimed “Antifa produced its first mass shooter” with the August 4 incident.

However, law enforcement officials have found no racial or political motives for the Dayton shooting — unlike the August 3 El Paso attack, which authorities believe was motivated by white supremacist ideology and the shooter’s hatred of Hispanic immigrants.

D’Souza’s attempts to “both sides” racist violence in America notwithstanding, his interview on one of Fox’s hard news shows erodes the network’s supposed barrier between their “news” and “opinion” sides. This oft-touted divide at Fox News is presumably in place to protect the brand of their hard news division — which includes shows anchored by the likes of Bream, Bret Baier, Chris Wallace, and Martha MacCallum — amid the constant flood of controversies stirred up by the opinion side — led by primetime hosts Sean Hannity, Tucker Carlson, and Laura Ingraham, whose combined shows have resulted in the network losing dozens of advertisers in recent years.

Fox News has gone so far as to ban certain controversial guests from appearing on their “hard news” shows, while still allowing them to go on their primetime opinion programs. Two such examples include former Fox News contributor Seb Gorka and right-wing blogger Sara Carter, who Mediaite reported were barred from the network’s news line up despite frequent appearances on Hannity.

“It was part of a discussion on immigration in the wake of El Paso between two guests of differing points of view. We did not discuss Mueller or tweets from several weeks ago,” Wallace stated on Tuesday.

D’Souza’s career in punditry is extensive, but he is currently best known for authoring books and putting out documentaries almost every two years — always in the lead up to presidential or midterm elections — which allege that the Democratic Party or liberals in general are actually behind the racism propagated throughout U.S. history.

He omits, of course, any current racism evidence by conservatives or white supremacists, instead cherrypicking decades or centuries-old examples of bigotry that fit his partisan narrative. One noted example is D’Souza’s allegation that Democrats are even more racist than Nazis. In a 1995 book, titled, The End of Racism, D’Souza also claimed that systemic racism in America is entirely nonexistent today. But he still made sure to offer a defense of white slave owners in the work, arguing that black chattel slaves were actually treated “pretty well” due to the “religious and ethical sensibilities of masters.”

(It should be noted D’Souza has his own run ins with racism, like when he called Barack Obama — America’s first black president — a “grown up” Trayvon Martin, referred to him as a “boy” from “the ghetto,” defended birther conspiracy theories about him being “actually born” in Kenya, and suggested that he governed the U.S. like a “philandering, inebriated African socialist.”)

D’Souza’s claims about U.S. history are so far removed from reality that more than 50 leading historians — experts hailing from Yale to D’Souza’s alma mater of Dartmouth — recently came forward to publicly condemn or offer corrections to his books and movies on the history of racism in America.

D’Souza’s more recent controversies include his vicious mocking of high school students who had just survived the Parkland shooting — a comment he was forced to retract and apologize for — and promoting conspiracy theories about media outlets and Democratic politicians sending themselves “fake mail bombs” for attention. D’Souza’s bombing conspiracy was derailed due to Trump supporter Cesar Sayoc, the shipper of said mail bombs, being sentenced to 20 years in prison for sending the threatening packages to Donald Trump’s perceived enemies.

It is not entirely clear what percentage of D’Souza’s opinions Fox News stands by, but one of the network’s news shows clearly respects his viewpoint enough to treat him like an analyst who can contribute to sensitive conversations about mass shootings and add to the “discussion” taking place on the network’s “hard news” shows.