Fox News personality Jesse Watters insisted, “we have to do away with all the politics and just try to get people vaxxed,” on Friday afternoon, which ordinarily would be a comment worthy of praise. However, in this instance, the call for a partisan ceasefire comment came mere seconds after his false political attack that “all of the [Covid] hot spots are in huge Democrat cities.” They are not.

Bill Hemmer asked Watters if he was aware that 45% of all New York City residents are unvaccinated, a rate on par with the national average. “If you look at the map of the United States and show the hot spots, all of the hot spots are in huge Democrat cities. New York City, Atlanta, Los Angeles,” Watters replied. “Not a lot of Trump voters in those cities.”

“We have to do away with all the politics and just try to get people vaxxed,” he continued. “At a certain point, you have to stop. You can’t push people that hard.”

But take a look at the recent Covid case tracking at the New York Times, based on publicly released local data, and Watters is way off. Take a look at a map of US counties, the darker the color the hotter the Covid spot: 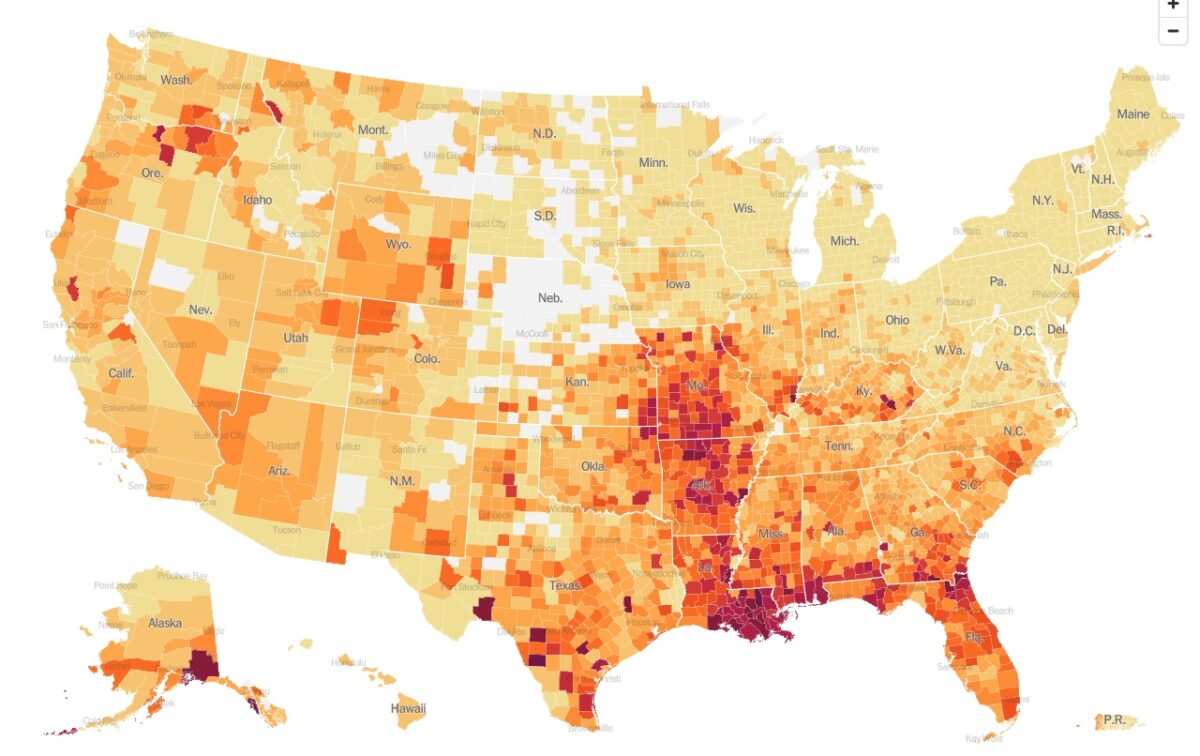 It’s always difficult to assess the intent behind this sort of misinformation on the most-watched cable network. Is Watters really that poorly informed and ignorant to the current situation of Covid infections? Or is he aware and doesn’t care that his words are wrong because he gets paid handsomely by a cable news outlet eager to entertain an audience who appear to want to hear such information, regardless of its veracity.

The most charitable explanation to Watters’s comments is that he is referencing the first wave of Covid-19 in Spring of 2020. Major metropolitan areas, with dense urban populations, did in fact have the highest rates of infections. But that was well over a year ago, and since then, the coronavirus pandemic equation has changed. Dramatically.

As the CDC has made clear, this is now a pandemic of the unvaccinated. Nearly 99% of all hospitalizations are those who have thus far refused the vaccine. The largest percentage of unvaccinated individuals are now in “red states “such as Missouri, Arkansas, and  Louisiana. The infection rates in the “huge Democrat cities” Watters cited, like New York City, remain relatively low.

Watters’s comment went unchecked by news anchors Hemmer and Dana Perino, largely due to the convivial tenor of the conversation. But misinformation is misinformation, and a news anchor should call it out when uttered on a “news” program, regardless if a friendly colleague utters it.

However, to Watters’ credit, he did reveal that he and his wife received vaccination shots later in the segment and spoke with encouragement about all other Americans getting the same.

Mediaite reached Fox News for comment but has not received a reply. We will update the post if we do.

“According to the latest CDC guidance, fully vaccinated people should be wearing masks indoors in places where the CDC categorizes as having ‘high’ and ‘substantial’ transmission rates. While ridiculous, this applies to nearly every major metropolitan area in the United States…Los Angeles, New York, Atlanta, Houston, Miami, St. Louis, etc…according to the ‘hot spot’ county map highlighted on the CDC website. Plus, anyone with common sense understands that 3.5M unvaccinated New York residents living within 300 square miles of each other, is more of a so-called ‘hot spot,’ than just 388,000 unvaccinated Wyoming residents living within 98,000 square miles of each other. Just following the science.”