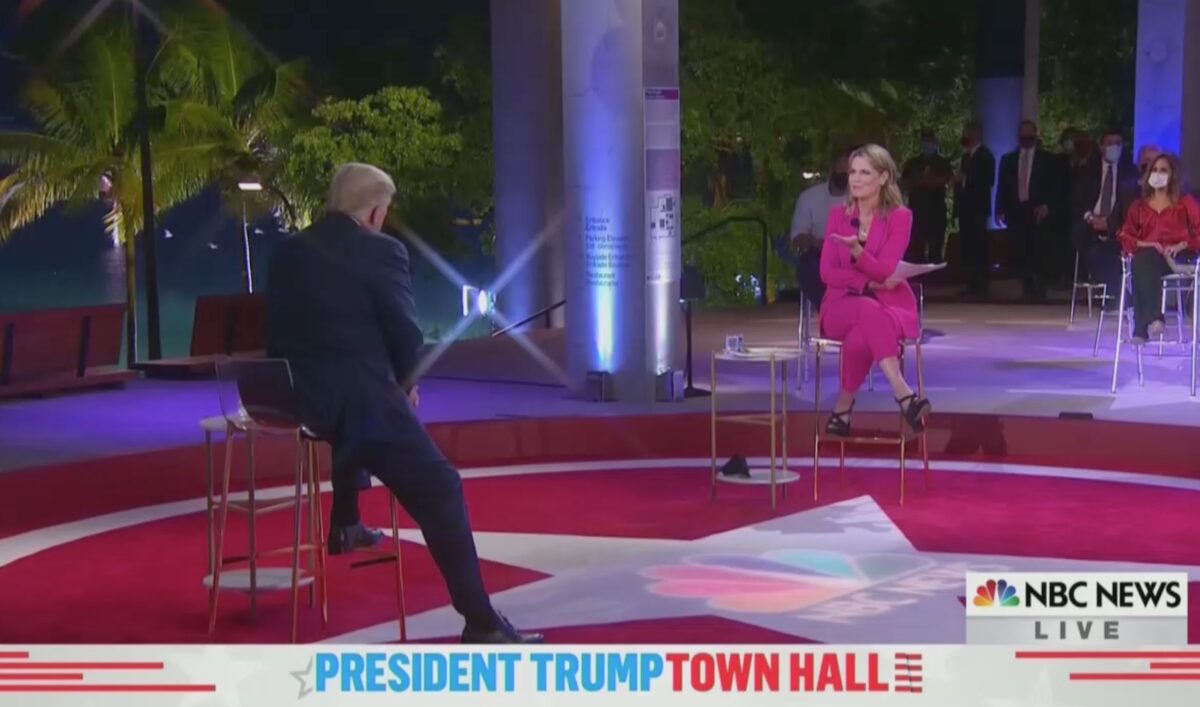 Like nearly everything else in today’s hyperpartisan landscape, the opinion media reaction to the dueling town halls from Thursday night fell along party lines. But the conservative media’s outrage at Savannah Guthrie’s temerity to ask challenging questions to President Donald Trump reveals that many on the right side of the political media aisle have forgotten the basic tenet of journalism is to speak truth to power.

Many are remarkably butthurt that the commander in chief had to endure FORTY questions from a non-sycophantic interviewer not bent on trying to impress President Trump, White House aides, or fellow pro-Trump media surrogates.

Guthrie received plaudits for her respectful but tough handling of President Trump’s world-class pivoting, obfuscation, and consistent ignoring of questions that, in hindsight, weren’t really that difficult. She did ask a lot of questions for a host of a town hall event, but many of the questions came in the middle of Trump’s rambling responses that simply didn’t come close to answering the questions.

A simple survey of some of the fairly anodyne questions asked by Guthrie included when Trump was last tested negative before his Covid-19 infection; if he can condemn white supremacy and QAnon; and to whom is he in debt regarding the $421 million he appeared to confirm. In any other situation, these questions are the easiest of softballs.

Trump Campaign spokesman Tim Murtaugh set the stage in a statement that read, “Even though the commission canceled the in-person debate that could have happened tonight, one occurred anyway, and President Trump soundly defeated NBC’s Savannah Guthrie in her role as debate opponent and Joe Biden surrogate.”

Sean Hannity also called Guthrie “Joe Biden’s surrogate,” and said, “NBC Fake News did their best to just ambush President Trump at tonight’s town hall.” Fox News resident homunculus Greg Gutfeld chimed in on Twitter asking “this is a townhall? where is the town? its just Savannah badgering. what a joke.”

And so it went. Fox News personalities are simply so inured with the softball batting practice provided to Trump by the likes of Hannity, Maria Bartiromo, Dr. Marc Seigel, Pete Hegseth, Ainsley Earhardt…honestly the list goes on, that they forget that true journalists are supposed to ask tough questions.

Judd Legum noted via Twitter “In case you weren’t watching NBC last night, the President of the United States said he didn’t know whether top Democrats are part of a secret Satanic pedophile cult and had “no position” on whether, as Vice President, Biden ordered the murder of Navy SEALs.”

CNN’s Jake Tapper also called out critics of Guthrie’s questioning via Twitter, noting “if you’re more upset that Savannah challenged him on this lunacy than the president besmirching American heroes and spreading deranged lies, you need to take a long, hard look in the mirror.”

George Orwell is often credited with the famous line “Journalism is printing what someone else does not want published; everything else is public relations.” Fox News hosts angry that Guthrie challenged President Trump should consider what role they are truly playing.